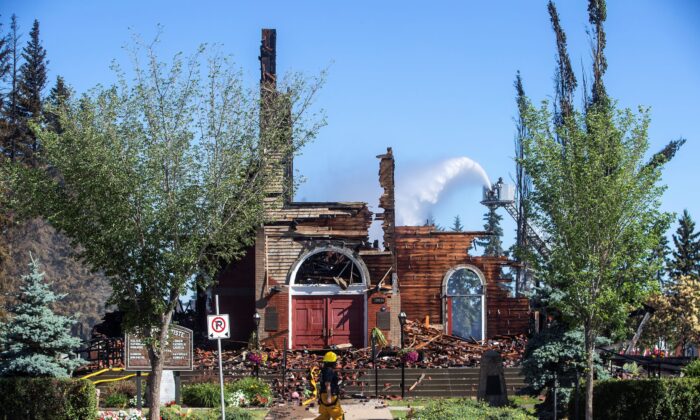 A woman has been sentenced to four years in prison for burning down a Coptic Orthodox church in British Columbia last year following the discovery of unmarked graves at residential schools.

Kathleen Panek, 35, pleaded guilty to two counts of arson in relation to the burning of the St. George Coptic Orthodox Church in Surrey’s Whalley neighbourhood on July 19, 2021, reported Global News.

Panek was also accused of setting fire to cardboard boxes outside of a unit in Whalley’s Sunshine Housing Co-op on March 15, 2021. Her sentence meets the prosecutors’ request of two years for each count, to be served consecutively, deducting the time she has already served in custody since her arrest on Aug. 26, 2021.

The Coptic church was one case among a series of burning or vandalizing churches in the months following the discovery of what was believed to be the remains of 215 children in unmarked graves at a former residential school site in Kamloops, B.C., in late May 2021. The number of gravesites, uncovered using ground-penetrating radar, was later adjusted to 200.

In the early morning of June 26, 2021, two more Catholic churches were burned down. The first, St. Ann’s Catholic Church, was located on Upper Similkameen Indian Band land, and the second was situated on Lower Similkameen land at Chopaka.

An Anglican church in B.C. was also found on fire on June 26, though the flames were put out before causing major damage.

In Alberta, a fire also destroyed the Siksika First Nation Catholic Church on June 28. The Gleichen RCMP said at the time that they believe the fire was deliberately set. Just days later, the police were again called in to respond to a blaze at St. John Baptiste Parish in Morinville, north of Edmonton.

As of mid-July last year, 21 churches have been lit on fire and another 32 have been vandalized across the country.

Panek was caught on security camera when she tried to set the Coptic church’s front door decorations on fire four days prior to the fire that burned down the building, Crown prosecutor Mike Fortino said in a statement of facts read in court on Feb. 24.

Fortino told the Surrey court that Panek admitted to being behind both church fires, and that she did so because she was upset after a fight with her boyfriend. No evidence submitted to court suggested the burning of the church was hate-motivated, Global News reported.