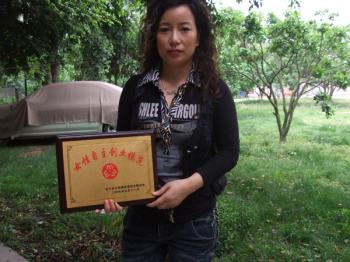 Authorities have rounded up relatives of a woman who endured 16 days in agony under police guard after she burned herself beyond recognition in protest at the forced demolition of her house.

A well-known entrepreneur from Chengdu City, Tangg Fuzhen died on Nov. 29; authorities are still holding 11 of her relatives in custody, according to family members.

Tang’s house was to be demolished in mid November to make way for a new road. More than 300 officials, firemen, police, and people in camouflage arrived at the village where the family resided on the morning of Nov. 13, ready to evict the family and knock down the house.

According to local residents, dozens of homes have been destroyed and families forcibly evicted since 2007; they said no legal permits were obtained for the road construction.

Tang poured gasoline over her body, and yelled “Don’t come up here. Don’t push me. Otherwise I’ll die in front of you,” witnesses said. The demolition team kept advancing, and Tang’s body was then on fire. She was doused by fire fighters soon after, as videos of the incident that have circulated across the Internet show.

After learning that Tang was in critical condition her sister went to visit her on the evening of Nov. 29, but was turned away, according to family members. The family did not appear to know her whereabouts until then, according to reports.

Tang’s husband and son, Hu Changming and Hu Yanxi, were allowed to see her, but only under the watch of local officials and police. That night, officials put the hospital under martial law, and more than 10 police cars and 100 personnel were sent to surround it, according to family.

“They didn’t allow us to go near her with the excuse that they were trying to resuscitate her,” Tang’s brother said, aggrieved. “But the officials went in and out freely.”

Chengdu City authorities said that approval was needed to release her body, and did not do so until Nov. 30, after relatives’ increasingly desperate requests.

“They are all bandits, worse than the bandits, and inhuman. She’s now dead,” her brother said in a telephone interview. ”Was it wrong to [want to] retrieve her body? They rejected our request. After several back-and-forth negotiations, every family member was furious. Finally, the police transported the body to the funeral home. A lot of people from the government and the police department were guarding [her corpse]. It was horrible to see. She was still wrapped in gauze…. We were not allowed near her. It is cruel and inhuman.”

He explained how they hung a banner in the funeral parlor hall reading “Build a harmonious society. Oppose violent eviction and demolition.” Local authorities sent police to tell them to take it down, he said.

Eleven members of the immediate family were detained, while three went missing. Tang’s brother, who did not want to give his name, was told by the police that they were being “treated for injuries.” He said they were injured after going with the police to “assist with the investigation.” [still figuring how they were arrested specifically]

The Epoch Times called the Jinniu Foreign Propaganda Office for comment on the matter. The office director said that both the police and justice department are investigating the case. He couldn’t respond to why the relatives had been taken into custody. “The charge is ‘obstructing public security.’ The police took the action of detaining a criminal,” he said, but did not elaborate.

Tang Fuzhen was the wife of Hu Changming, the CEO of Chengdu Oshi Wei Industrial Co., Ltd. Hu invested more than 400 million in local factories, bringing 100 jobs to the area, and was named “Welfare Leader” by the local government. Tang Fuzhen was named the “Model Women Entrepreneur” by a local women’s association.