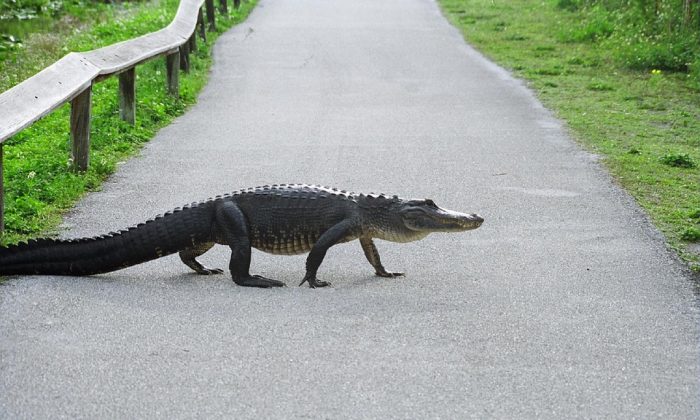 Image of an alligator. (Skeeze/Pixabay)
US News

Woman Sees Alligator With Knife Sticking out of Head

An alligator in Texas was seen swimming with a large knife stuck in its head. It’s not clear how the blade got there.

Erin Weaver, a Houston woman, said she spotted the alligator.

KNIFE STUCK IN GATOR: Neighbors in Sugar Land are seeking help for an alligator found with a knife in between its eyes. https://t.co/Ew4GrzZFTw

Weaver said that over the years, she never saw an alligator attack anyone, and she isn’t sure why someone would stab one in the skull.

“I feel that somebody did this on purpose,” KTRK quoted her as saying.

In the next week, a Texas wildlife agency said it would investigate.

“I want to get help for this alligator. I don’t want to see an alligator swimming around with a knife in its head and suffering,” she said.

A local official, Chris Bishop, told the news outlet he is optimistic the gator is not in pain and could live like this for some time.

Last month, an 11-foot-long alligator was spotted inside a Florida home after going through the window.

The Clearwater Police Department, describing the gator as “an unwanted overnight visitor,” said it was removed from a home in Clearwater.

“The 11-foot-long gator broke into the home through some low windows in the kitchen. The homeowner called police and a trapper also responded to the scene,” the police department wrote on Facebook.

“I decided I wasn’t staying there, so I went back to my bedroom and closed the door and called the police,” Wischhusen recalled to Fox 13. “I was hyperventilating a little, so what I did was I went on the computer and played games to settle down.”

Two trappers and ten officers responded to the scene.

Wischhusen said she isn’t sure why the alligator broke into her house after passing by four empty condos.

“He was really tying. But it’s mating season,” she added. “They’ll try anything.”

And over Memorial Day weekend, a woman suffered injuries after she was attacked by an alligator in Fay Lake Wilderness Park, Florida.

“We have a female who was allegedly bit by an alligator. She was out in the woods, swimming in a lake, from what we understand,” Brevard County Fire District Chief Thomas Uzel told the news outlet. “She was classified as a trauma alert and she was transported to Holmes.”