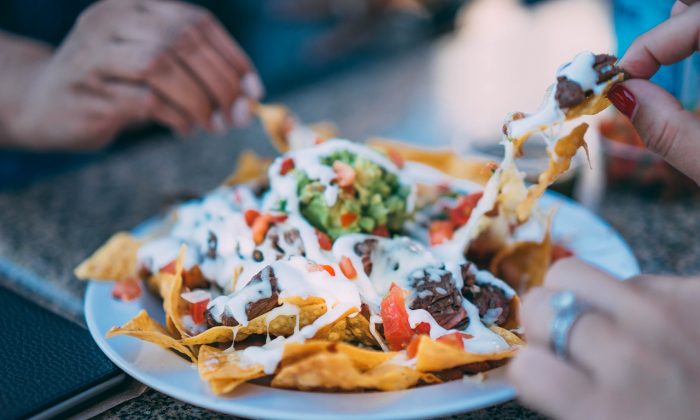 File photo of a plate of nachos. (StockSnap/Pixabay)
US News

Woman Says She Found a ‘Doorknob’ in Her Taco Bell Nachos

A woman from New York State said she found more than just tortilla chips and sauce when she ordered nachos at Taco Bell on July 4.

Eve Saint from Fishkill claims the fast-food chain had left a “doorknob” in her meal and she shared a photo of the object covered in sauce and cheese on her Facebook to prove her point.

Saint later told Hudson Valley Post that the object was actually a nacho cheese pump. She said it took several attempts to reach Taco Bell before anyone took her complaint seriously.

“I found out its the pump of a cheese dispenser. They hung up on me and told me I was lying then offered me a free nachos,” Saint told the news outlet.

She said she was not sure how the pump ended up in her food.

The fast-food company told the news outlet in a statement that they were looking into the incident.

“We take this very seriously. The franchisee that owns and operates this location is looking into this matter and strives to make things right with the customer,” the statement said.

This is not the first time unusual objects have been found in people’s food.

Last year, a New Hampshire woman said she was surprised to find a dead lizard in the pre-packaged lettuce she had bought at a supermarket.

Michelle Carr, from Kittery, Maine, said she bought the lettuce at a Shaw’s supermarket.

“It was disgusting,” Carr told ABC affiliate WCVB. “It was a shock. I immediately started to retch.”

The reptile, about 3 inches long, was dead and missing its tail.

Carr said she washing the lettuce to make a homemade salad for lunch on Jan. 29, the Portsmouth Herald reported. The new mother of a 10-week-old baby went in to take a bite, but her fork hit something firmer than an avocado slice.

“I put my fork into my salad after a couple of bites and realized that my fork was not in an avocado slice,” she told WCVB. “It was a lizard.”

She is now unsure if she consumed the tail “There’s no way to know whether or not I actually ingested the tail or not,” Carr said.

After the initial shock, she called health officials about the incident.

Carr hopes her incident comes as a warning to others to watch what they purchase and to know where it comes from.

“It’s not just something you read about in the papers,” she told WCVB. “We need to be really diligent about washing your produce no matter where you get it from.”

A Shaw’s spokesman said at the time that the company is working to figure out what happened and how to stop it from occurring again.

There was a series of incidents related to food in 2018, many of which were disgusting and outright outrageous.