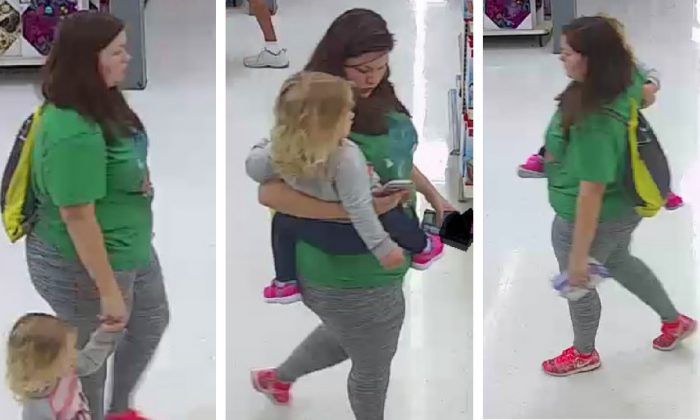 The FBI has released these three photos of a woman with what appears to be missing 3-year-old Mariah Woods walking through a Morehead, N.C. Walmart store just a few hours after the child was reported missing. (FBI)
Crime and Incidents

Woman Says Child in FBI Photos Is Her Daughter, Not Missing Toddler

A woman featured in Walmart surveillance photos released by the FBI is not carrying missing three-year-old Mariah Woods, according to reports.

Jetta Long, 23, of Newport, North Carolina, says it is indeed her pictured in the photos the FBI had distributed. However, she told News Channel 12, the child with her is her own daughter—not Mariah Woods, the subject of a statewide Amber Alert.

Long said she is sorry if the confusion “may have gotten the hopes of the family up.”

Authorities in Onslow County, North Carolina, confirmed that the child seen in the FBI photos is not three-year-old Mariah Woods, according to WYFF-4 TV.

The Charlotte, North Carolina, FBI office released pictures of a woman carrying a child through a Walmart store in Morehead City.

The FBI asked for help identifying the lady carrying what looks like missing Amber Alert child Mariah Woods, who was kidnapped from her home in the early hours of Nov. 27.

The photos were taken about 9:30 a.m. Monday, just a few hours after three-year-old Mariah Woods was reported missing from her home near Jacksonville, North Carolina. The photos are from a Walmart store about 40 miles from the Woods’ residence.

“The Onslow County Sheriff’s Office and the FBI are attempting to determine whether the child depicted in this image is missing 3-year-old, Mariah Woods,” FBI officials said.

Mariah Kay Woods disappeared sometime between midnight and Monday morning from her home on Dawson Cabin Road in Jacksonville.

Her mother, Kristy Woods, told WNCT News that she checked on her daughter at 11 p.m. on Nov. 26.

Her live-in boyfriend said he saw the child when she woke up around midnight, after which he sent her back to bed. At 6:45 Monday morning, Nov. 27, the girl’s grandmother went to wake the child but she was not there.

Mariah’s biological father, Alex Woods, told NewsChannel 12 that he was not convinced by the story that Mariah has been abducted.

“Someone just walked right up in there, grabbed the 3-year-old out of the bed and she didn’t cry, she didn’t scream?” Woods asked.

“Nobody heard anything? Four people in the house—two adults and two kids—someone just comes up and snatches the baby and walks out?”

Woods told NewsChannel 12 that he was given custody of the kids last year while CPS was investigating an incident involving their mother. He has not seen the children since, though he claims that was not of his choosing.

Family members told WNCT that there was no sign of forced entry or any disarray in Mariah’s room, but did say that the home’s back door was unlocked.

Mariah’s grandmother told WNCT that Mariah had an orthopedic problem with her left leg, which made it difficult for the child to walk steadily. It seemed unlikely that Mariah would have wandered off, given her difficulty walking.

You may also contact your local FBI office, or the nearest American Embassy or Consulate.

Do you think Mariah was kidnapped? Do you think someone arranged for a family friend to take the child? Post your comments below.

If you liked this story, please share it with your friends.