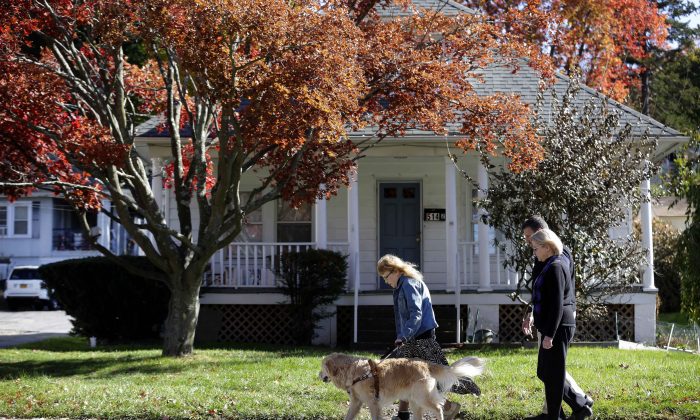 Audrey Stone (L) walks with her guide dog, Figo, after they were reunited or the first time in months after an accident that injured both of them in Brewster, N.Y., Monday, Oct. 26, 2015. (AP Photo/Seth Wenig)
New York

Woman Reunites With Guide Dog That Saved Her

BREWSTER, N.Y. — Lying in a hospital after being hit by a school minibus, Audrey Stone set herself a goal: to get well so she could bring back home the guide dog that had jumped in front of a bus to save her.

Stone, who is legally blind, spent months in a rehabilitation hospital. The golden retriever, Figo, had surgery himself and went back to his trainers to make sure he would be able to work again.

And at last, there was Figo striding up the driveway to greet her Monday at her suburban New York house.

“Oh, my good boy,” she exclaimed as she petted him, his tail wagging full-force. “You’re home — finally!”

Stone and Figo (pronounced FEE-goh) had been together for about 6 ½ years before the June 8 crash as they crossed a street a block from her home in Brewster, a town about 60 miles north of Manhattan.

The dog’s leap to put himself between her and the oncoming, turning bus — and his efforts to stick by her side afterward when both were injured — brought cards, calls and dog toys from as far away as England. The American Society for the Prevention of Cruelty to Animals is giving Figo its Dog of the Year award.

“Basically, he would have died for me, doing what he did,” said Stone, who suffered a broken ankle, elbow and ribs and needed stitches in her head. Figo had a serious gash in one of his legs.

The bus driver, who said he didn’t see Stone and the dog, was ticketed.

Stone was born with very limited vision, and a photo album of Figo’s recovery has 8-by-10 pictures so she can make them out. She used a cane for years before deciding to try a guide dog.

A dog, she says, offers more support and protection, as well as companionship and an easy entree to conversation with passers-by. “It gets me out more,” Stone says.

Figo, 8, is her third dog from the Smithtown-based Guide Dog Foundation for the Blind, which breeds and trains guides, placing about 85 last year. Overall, there are about 10,000 working guide dogs nationwide, trained by various groups, said Wells Jones, the foundation’s executive director.

The dogs are trained to avoid oncoming traffic, but turning vehicles present the most difficultly, he said. The animals also are prepared to place themselves between their handlers and danger in some situations.

“We’re tremendously proud of Figo, who really did show a great deal of bravery,” Jones said.

While Stone was hospitalized and later underwent weeks of outpatient physical therapy, Figo got donor-paid care at Middlebranch Veterinary, then returned to the Guide Dog Foundation to ensure the bus crash hadn’t made him too fearful or distracted to do his job. Over the weekend, Lyman, Maine-based trainer Doug Wiggin even took Figo to the accident site but didn’t find any signs of trouble.

By noon Monday, Figo was leading Stone down the sidewalk on her block, padding slowly to match her still-recovering pace. They would leave crossing a street for the next day, but it was a good start.