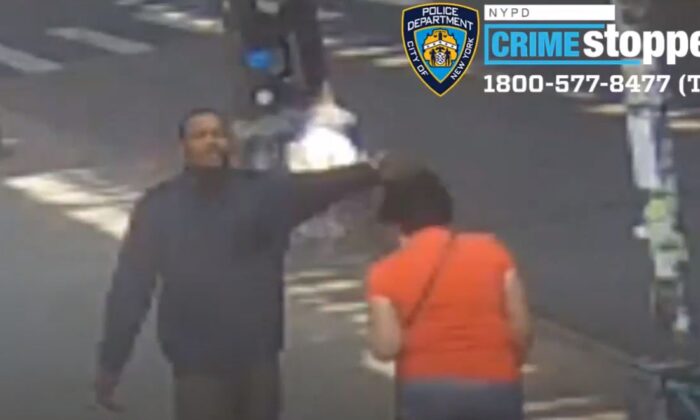 The New York City Police Department (NYPD) is searching for a man who punched a 78-year-old woman in the head in Brooklyn earlier in June, continuing a trend of unprovoked assaults on elderly people in the city. (NYPD)
US News

Woman Punched in Head While Walking Down Street in NYC: Police

The New York City Police Department (NYPD) is searching for a man who punched a 78-year-old woman in the head in Brooklyn earlier in June, continuing a trend of unprovoked assaults on elderly people in the city.

The elderly woman was walking down Broadway near Park Street in the Bushwick neighborhood when a man walking in the opposite direction hit her in the head. He is seen casually walking before flipping his closed fist out, punching her in the face.

He then appears to say something to her as she holds her head.

Officials told 1010Wins that she woman was not hospitalized but suffered pain in the attack.

Authorities said the attack happened on June 10 at 5:15 p.m., according to ABC7.

The attacker is described as a male, with a dark complexion or is black, about 5’9″ tall, and a medium build with short dark hair.

The incident comes after a man was arrested for pushing a 92-year-old woman to the ground in Gramercy, Manhattan, which was also caught on a surveillance camera. The woman hit her head on a fire hydrant and is in stable condition in the hospital.

In a later incident, an 80-year-old man was knocked down to the ground and robbed of his backpack in the Bronx, which was also captured on video.

On June 21, the NYPD announced the arrest of a homeless man who randomly punched a 73-year-old woman on a subway platform in the Bronx. Ahmed Kromah, 23, was accused of walking up to the woman, punching her, and running away.

Police officials have said violent crimes have spiked in recent weeks across New York City, coming after protests, unrest, and vandalism in the wake of George Floyd’s death in Minneapolis in late May.

NYPD officials told news outlets on Sunday that at least 22 people have been shot in the city in separate incidents over the weekend, including a fatal incident in East New York, Brooklyn. A 35-year-old male was gunned down as he was washing his car, officials said.