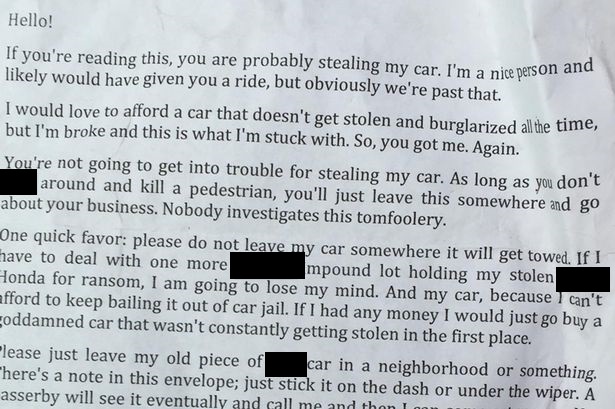 A woman who lives near Portland, Oregon, left a very polite note for burglars who kept stealing her car.

Reddit user “mfiasco” left the sarcastic note in the glovebox of his Honda in the hope that thieves would leave the car where it wouldn’t get towed, Fox2Now reported.

The letter explains that his vehicle was towed several times.

And apparently, the letter worked—they listened.

If you’re reading this, you are probably stealing my car. I’m a nice person and likely would you have given you a ride, but obviously we’re past that.

I would love to afford a car that doesn’t get stolen and burglarised all the time, but I’m broke and this is what I’m stuck with. So, you got me. Again.

You’re not going to get into trouble for stealing my car. As long as you don’t [expletive] around and a kill a pedestrian, you’ll just leave this somewhere and go about your business. Nobody investigates this tomfoolery.

One quick favor: please do not leave my car somewhere if it will get towed. If I have to deal with one more [expletive] impound lot holding my stolen [expletive] Honda for ransom, I am going to lose my mind.

And my car, because I can’t afford to keep bailing it out of car jail. If I had any money I would just go buy a [expletive] car that wasn’t constantly getting stolen in the first place.

Please just leave my old piece of [expletive] car in a neighborhood or something.

She said that it’s a “win-win” for both, as he won’t have to deal with police reports and insurance.

“I don’t have to deal with police reports, insurance claims and tow trucks, and you don’t have to feel like a jerk for ruining the month of a nice person,” the user wrote.

It sarcastically concludes, “Thank you. Enjoy your ride.”