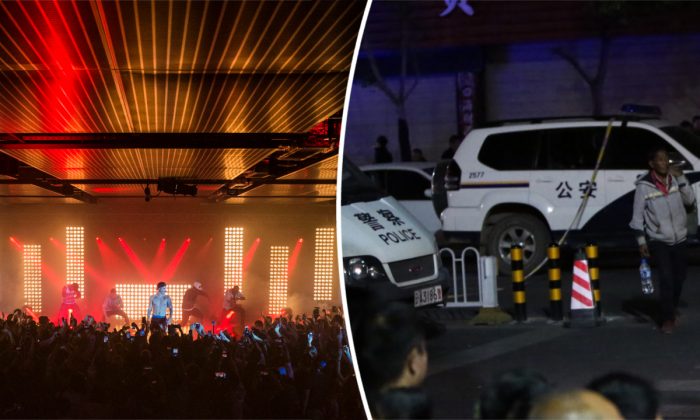 A mother left her one-year-old son in a car on a hot summer night while she attended a concert, according to Chinese online news outlet Pear Videos. The child was heard crying by two passersby who helped get the boy safely out of the car.

The concert, which was held on June 21 in Shanxian City, Shandong Province, China, did not allow children into the venue. The unnamed mother decided to leave the boy inside, saying that he was sleeping when she left him, according to Pear Videos.

Police and onlookers criticized her behavior, but no criminal punishment was reported.

The concert that the woman attended did not allow young children to go inside, so the mother left her baby in the car with the sunroof open for ventilation.

Police said that the concert stopped checking tickets at 7:00 p.m., which suggests that the mother left her son there before that time.

The child was discovered when he was heard crying loudly inside the car. The car was parked in the parking lot outside the concert venue.

Two passersby—a woman and her daughter—heard the boy crying. The woman told her young daughter to climb into the open sunroof of the car and unlock the doors from the inside.

In a video recorded by police body cameras, the woman says, “[The baby] is sitting inside the car, open it from the inside.”

The girl disappears into the dark car, and within seconds, the car alarm starts going off.

“Good, good, good,” the mother says, as the daughter opens the door.

“Don’t cry, don’t cry,” another person can be heard saying as they hand the young boy off to a police officer.

The police said it was very hot and humid that day, and the baby’s entire body was sweating when he was found. “His lips were a little purple, and he was crying really hard,” Sun Chengdong told Pear Videos.

The police attempted to contact the mother after they ran a background check with the car’s license plate number. However, she did not answer her phone.

At about 9:30 p.m., the mother came back to her car, with police and crowds of people awaiting her. When they asked why she left her son in the car, she defended herself by saying the boy was sleeping.

“You’re lucky he was awake, if he didn’t wake up, you wouldn’t see him right now,” one man said to her, according to Pear Videos.