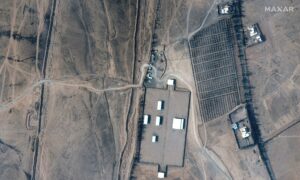 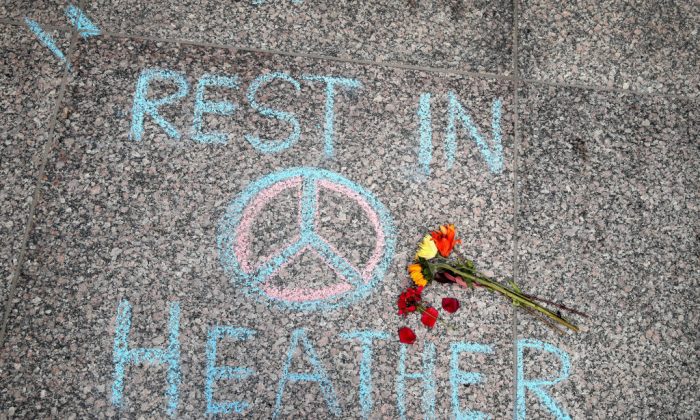 Flowers are laid on a memorial to Heather Heyer that was chalked on the pavement during a demonstration on August 13, 2017 in Chicago, Illinois. (Scott Olson/Getty Images)
US

The grieving parents of the woman who was killed in Charlottesville when a car rammed into a crowd of protesters said that she was a born do-gooder with a strong sense of right and wrong.

“She was my only daughter—she was my heart,” said her father Mark Heyer.

The dad told New York Post that his daughter was a social justice warrior.

“My daughter was fighting for equal rights, demonstrating against hatred and doing what she thought was right,” Mark Heyer said. “She ended up dying to prove it.”

Heather Heyer was part of a counter-protest on Saturday, Aug. 12, against a variety of groups, including extremist nationalists and white supremacists, who gathered in Charlottesville for the Unite the Right rally to protest the removal of a Confederate statue.

Although Heyer participated peacefully, armed and violent members of the Antifa extremist group and other violent groups attacked and clashed with the Unite the Right crowd beginning on Friday night.

On Saturday, the Unite the Right event was canceled by authorities, with police instructing the protesters to leave. Clashes continued throughout the day, with police watching but not taking any action to protect either side.

Heather Heyer was a native of Green County, Virginia. She graduated from William Monroe High School in Stanardsville.

Heyer was working as a paralegal at the Miller Law Group in Charlottesville, according to the firm’s website.

Her dad was grief stricken and struggling to find words to describe his daughter.

“I’m not ready for all this,” the dad added, his voice breaking. “I’m still working around the fact that my baby girl got killed.”

But his grief hasn’t given way to anger.

“I can’t hate the man who did this to her because that would make me as bad as the people who did this,” he said. “As far as I’m concerned, he was deceived by the devil.”

Heather Heyer’s mom, Susan Bro, said that her daughter “always had a very strong sense of right and wrong, she always—even as a child—was very caught up in what she believed to be fair.”

“Somehow I almost feel that this is what she was born to be, is a focal point for change. I’m proud that what she was doing was peaceful,” she added.

The man who is accused of ramming his car into a crowd of protesters Saturday, Aug. 12, during a Virginia white supremacist rally had flunked the U.S. Army’s basic training program two years prior, the Army said.

James Fields, 20, of Ohio, didn’t enter a plea on Monday during an appearance before a Virginia judge. He was denied bail. Fields was charged with second-degree murder for killing Heather Heyer, a 32-year-old paralegal, while injuring scores more.

Army Lt. Col. Paul Haverstick, a Pentagon spokesman, told Fox News that Fields had failed basic training, saying he was “released from active duty due to a failure to meet training standards in December of 2015.”

“As a result he was never awarded a military occupational skill, nor was he assigned to a unit outside of basic training,” he said.

During the court appearance, Fields “appeared stoic and was looking down,” Fox reported. He also was not able to be represented by a public defender, according to Fox, because a relative of the public defender’s office was involved in the incident.

Fields confirmed he had no ties to the Charlottesville area, where the rally was held, saying he’s from Maumee, Ohio.


He was appointed a lawyer and his next court date is Aug. 25, according to Reuters.

On Sunday, his former high school history teacher, said that when Fields was a student, he “was very infatuated with the Nazis, with Adolf Hitler.”

“I developed a good rapport with him and used that rapport to constantly try to steer him away from those beliefs to show clear examples—why that thinking is wrong, why their beliefs were evil, you know, things like that,” Derek Weimer told WCPO of Fields, adding that he was on antipsychotic medication.

WARNING: Following video could be disturbing to some viewers.

The family of Heyer confirmed she was the lone fatality in the incident.

The mother of Fields told a local news outlet that she had told him to protest peacefully.

“I told him to be careful,” Samantha Bloom, who is a paraplegic, told the Toledo Blade. “[And] if they’re going to rally to make sure he’s doing it peacefully.”

Fields told her about the rally last week, she told the paper.

“I try to stay out of his political views,” she said. “I don’t get too involved.”

Fields had moved out of her house about “five or six months ago,” she added, saying they moved to Ohio from Kentucky about a year ago.