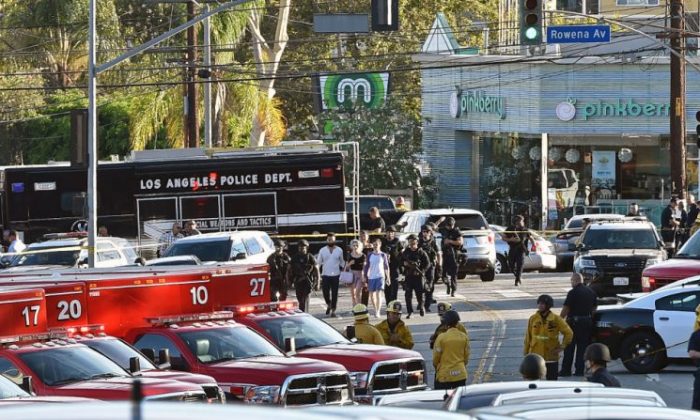 Police officers escort people after a suspect barricaded himself inside a Trader Joe's supermarket in the Silver Lake neighborhood of Los Angeles, on July 21, 2018. (Robyn Beck/AFP/Getty Images)
Crime and Incidents

A woman killed in Los Angeles during a shooting at a Trader Joe’s on July 21 was a manager at the store, her brother said.

“I’m sad to say she didn’t make it. My baby sister. My world. I appreciate the retweets and the love. Please respect my family’s privacy as we are still coming to terms with this,” Albert Corado said via Twitter.

A number of former colleagues took to social media to express condolences and remember Corado.

I’m sad to say she didn’t make it. My baby sister. My world. I appreciate the retweets and the love. Please respect my family’s privacy as we are still coming to terms with this. #TraderJoes #SilverLake

I miss my sister. I wish this wasn’t happening. Feels good to be with family, though. My dad is doing his best to keep it together. I am, too. Family is coming to visit from as far away as Australia. #MelydaCorado you were immensely loved.

“I worked with her for years. I am so so so sorry,” one former Trader Joe’s employee wrote on Twitter. “Such a lovely, sweet, friendly, hardworking woman. I was thinking about her the whole time, and it’s just incomprehensible.”

The shooting began as a family dispute in south Los Angeles involving a 28-year-old man, later identified as Gene Atkins, who shot his grandmother and his girlfriend. He dragged the girlfriend into his grandmother’s vehicle and fled the scene. Police began chasing his vehicle.

The chase ended outside the Trader Joe’s in the Silver Lake neighborhood after the man crashed the vehicle into a light post. After exchanging fire with police, the man fled into the store and a three-hour hostage negotiation ensued. Around 45 people were inside the store. The standoff ended when Atkins surrendered.

Corado was killed by gunfire during the exchange as she stepped into the parking lot just before Atkins went inside the store, the Times reported. It’s unclear whether she was shot by police officers or Atkins.

Sid Heal, a retired Los Angeles County Sheriff’s Department commander and use-of-force expert, said Atkins was an obvious danger to the public and officers and that sometimes officers fire into crowded situations.

“We try to have a clear field of fire, but obviously the suspect has a substantial, even a decisive, advantage if we don’t return fire,” he said. “There is no easy answer.”

The dispute that triggered the shooting apparently centered on Atkins arguing with his grandmother over letting his girlfriend sleep at their home. Family members said his mother died from leukemia in 2014 and the grandmother, Mary Madison, took care of him. Madison was in critical condition after undergoing multiple surgeries, police officers told KTLA.

“We pretty much have been trying to figure out why he would harm the one person who has done the most for him. We don’t understand. He must have blacked out,” cousin Deshon Hayward said.

Another cousin, Charleo Egland, told NBC that Atkins’s life was at a low point after he had lost his job and two vehicles lately.

“The last thing he told me was, ‘The next thing I do, I’m going to die doing it or I’m going to jail,'” Egland said.