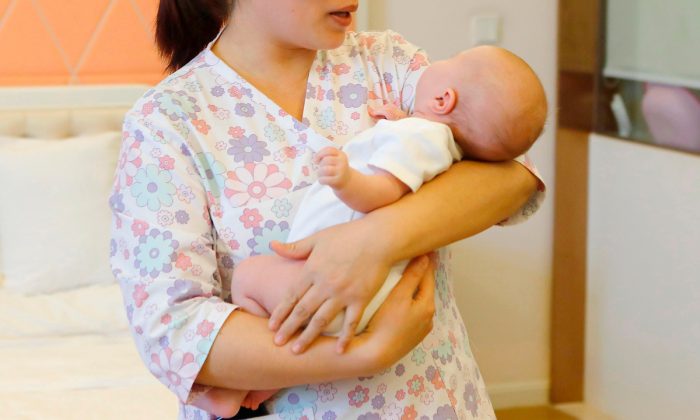 A woman holding a baby in China in this file photo. (AFP/Getty Images)
Social Issues

Woman Kidnaps Step-Grandson to Hide Miscarriage From Her Lover

A woman in the midst of an affair kidnapped her step-grandson in an attempt to prove to her lover that she was pregnant with their child, according to an Aug 19. report from Chinese online media outlet Pear Videos.

The woman, surnamed Zeng, stole the baby while the family was celebrating the child’s first month of life in Fengyang City of China’s Anhui Province. The report did not mention when the kidnapping occurred and where Zeng fled to with the child. The baby belonged to Zeng’s stepson.

She planned to convince her lover, surnamed Cai, that the child was theirs, according to Pear Videos. Three days after the kidnapping, the police found Zeng and the child.

The report did not mention how Zeng and Cai met, or for how long their affair had been going on. However, they did have plans for the future.

Cai said that he and Zeng had planned to start their own family, according to a police official who spoke to Pear Videos. To do so, they needed their own child.

In fact, Zeng had once been pregnant from the affair with Cai. But she suffered a miscarriage after she slipped and fell at her workplace, the police official told Pear Videos. However, Zeng didn’t tell Cai about the loss of their love child, and instead faked a pregnancy through pictures and a long distance relationship.

Zeng moved out after the miscarriage, returning to her hometown, but the report did not specifically say where. There, she took pictures of herself imitating a pregnancy, often by stuffing her clothes. She went from putting clothes inside her outfits, to pillows in the supposed later trimester.

She even faked pictures revealing her stomach, but had just pushed her belly out to create the image of pregnancy. Cai apparently believed her.

But without a real child, Zeng needed to prove that her claims were real. It so happened that her stepson’s wife had a baby boy around that time.

While a traditional first-month-birthday celebration was being held for the new baby, Zeng stole him away and left the area.

“At that time, I was looking for (them), but I couldn’t find them anywhere,” Zeng’s husband, Zhang, told Pear News. “Then I called the police, and when I called her, her phone was off.”

“I suspected that she had taken the child.”

Three days after disappearing, police found Zeng and the one-month-old baby. The report said the police detained Zeng, and are not investigating the case.