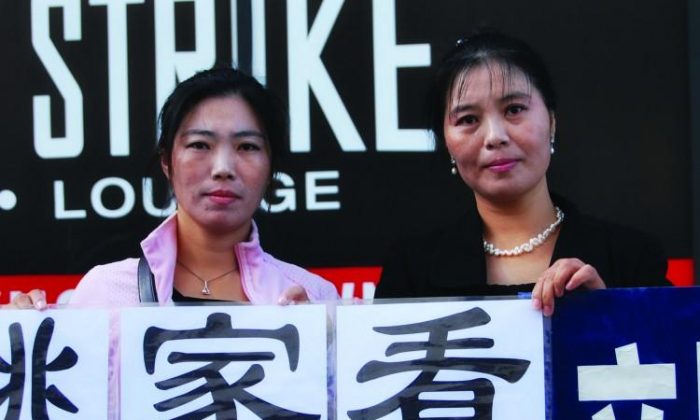 WASHINGTON—After Ma Chunmei was put in a Chinese prison lockup for the first time in her life in 1999, the guards fell asleep. They also forgot to close the padlock. She lifted it up, ever so carefully, hung it on the bars, and slowly swung the cell gate open. The lock slipped off and clattered to the ground, waking the guards, but Ma had already started bolting for the door, and into a cornfield across the road on the outskirts of Beijing.

Nearly 14 years later, and having gone through more suffering than she cares to describe in detail, Ma is living in Virginia. One of her younger sisters lives in New York. They are both practitioners of Falun Gong, a traditional Chinese spiritual practice persecuted by the Chinese Communist Party.

Though the older and younger Ma sisters are safe, the middle sister, Ma Chunling, is detained in China—whether being beaten and tortured, shut in dark isolation, or put to forced labor Chunmei is not even sure. A visit by her mother and father last year was rejected, even after the elderly couple traveled two days in the winter from Shandong to Liaoning Province.

Chunmei is now waging a vigorous campaign in the United States to secure the release of Chunling, perhaps even bring her to America and safety, using whatever means of persuasion she and her volunteer colleagues can muster. Letters from the public and congressional representatives flooding into Chinese labor camps can often help. She even laid the case out to Vice President Joe Biden last year.

“It’s without a doubt that anybody who’s got public attention and pressure, especially outside China, is essentially going to be protected by that pressure,” said Levi Browde, executive director of the Falun Dafa Information Center, in a telephone interview.

Communist authorities know that if they badly torture someone, and they’re released, word will get out.

The case of David Bu, or Bu Dongwei, was emblematic of that. He spent over two years in a labor camp, and didn’t realize why he was given lighter treatment by guards until after he was released: Amnesty International had made him part of their 2008 pre-Olympic human rights campaign, shedding public light on his persecution.

“If they know that the outside world is taking action, and care about a certain person, then the condition of this person will be improved,” Bu said in a 2010 video, wiping tears from his face. “Letters can make a difference.”

The urgency with which Chunmei needs to act to get her sister out is highlighted by the brutality of the treatment that the latter has faced.

According to Minghui.org, a Falun Gong website that carries firsthand news from China, Chunling has been “severely tortured,” in one case requiring stitches. That abuse could escalate if the treatment of sister Ma Chunmei is any indication.

Chunmei has written extensively on Falun Gong websites about her experiences in detention. In 1999, after appealing to the Chinese regime to not persecute Falun Gong—at that time, she had protested on Tiananmen Square to encourage the Party to “uphold its own constitution”—she was locked in a dark, wet storage room for 20 days.

“Guards beat me, cursed me, threatened me, and verbally attacked me,” she wrote. She was punched in the face repeatedly, bloodying her nose and mouth. She was shocked with an electric baton. A female guard stomped the nail off her thumb.

During one round of torture she was put on a “death bed,” where the practitioner’s arms are handcuffed to the headboard and legs tied with nylon ropes. The ropes are then wrapped tightly around the practitioner’s body, from legs to chest, constricting the victims breathing. They’re also regularly beaten. “I had bruises from being beaten all over my body. When I was finally allowed to get off from the bed, I felt like a dead person. Then I understood why it was called the ‘deathbed,'” she said in a previous interview with The Epoch Times.

In another incident she was hung by handcuffs. When Chunmei went on a hunger strike to protest the violence she was tied up and force-fed. “They fixed my four limbs to a metal bed and inserted a rubber tube into my stomach. They pulled the tube in and out to torture me. Corn meal sprayed everywhere. They were laughing at it, and took photos.”

Other adherents were given the same treatment, she said. “The sounds of electric baton shocks, guards beating and cursing, and the heartbreaking cries of Falun Gong practitioners filled the labor camp.”

The purpose of the torture is to destroy the victim’s will, so that they renounce their faith in Falun Gong.

Ma Chunmei and her sister were able to escape from China through Thailand. Once there they applied for refugee status, and were granted it, with the United Nations High Commissioner for Refugees. They came to the United States in 2010.

Chunling didn’t leave China at that time—she maintained her job at an insurance company in Dalian, where she has a strong network of colleagues and friends. But after speaking to a man on the street about Falun Gong on Aug. 29 last year, six police turned up at her house and took her away. She had been informed on. Her husband had to explain to the couple’s son that his mother had been taken away.

Chunling’s case at the moment is at a crucial stage, because she has not yet been formally sentenced—she is simply being held. Sufficient outside pressure may be enough for the authorities to decide it’s too much trouble, and release her. Chunmei’s hope for now is on getting enough phone calls placed, and letters sent, to the Yaojia Detention Center, at No. 270 Yaojia St, Ganjingzi District, Dalian City.