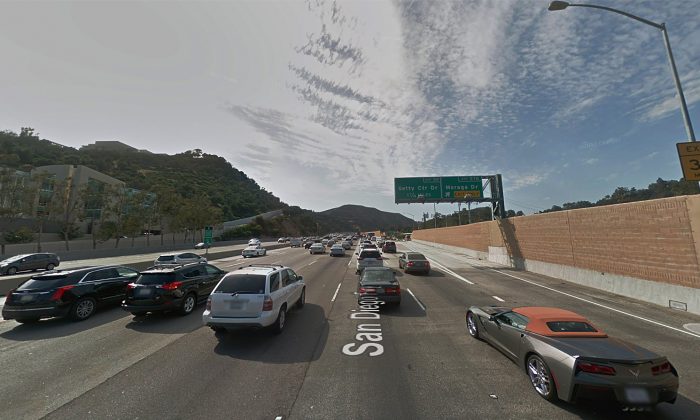 The Moraga Drive exchange on the 405 Freeway northbound. (Screenshot via Google Maps)
US News

One woman died and two men were injured when a car traveling at highway speed struck a car parked on the roadside near Bel Air, California, shortly after midnight on Feb.11.

ABC7 reported that a 26-year-old Simi Valley man was driving a Mini Cooper north on the 405, with a 29-year-old woman from Laguna Beach as a passenger.

The driver stopped at Moraga Drive shortly after 12:30 a.m., with the vehicle’s lights off.

A Nissan Sentra driven by a 47-year-old Ventura resident slammed into the stopped car at approximately 65 mph.

Los Angeles Fire Department Public Service Officer Amy Bastman told ABC7 that the three injured people were transported to Ronald Reagan UCLA Medical Center. One of the victims was in fair condition, the other two in critical condition.

None of the involved individuals have been identified to the public.

California Highway Patrol closed the 405 northbound for about two hours.