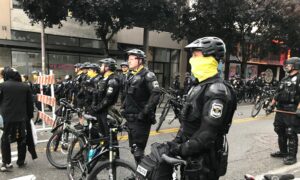 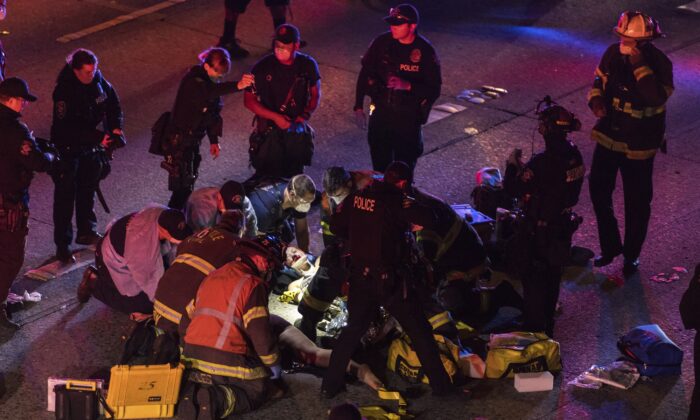 Emergency workers tend to an injured person on the ground after a driver struck two protesters on I-5 in Seattle, Wash., on July 4, 2020. (James Anderson via AP)
Crime and Incidents

A woman hit by a car while she and others were blocking a highway in Seattle died, a hospital spokeswoman said.

Taylor was one of two women hit by a man driving a white Jaguar around 1:36 a.m. on July 4.

Police had closed down a portion of the highway, I-5, just before midnight on Friday. Seattle police said in a report that the driver, 27-year-old Dawit Kelete, entered on an exit ramp before turning onto the highway to go in the correct direction.

The driver was approaching vehicles that were parked across the highway by protesters to block it when he “made a sharp left turn entering the right lane and struck two pedestrians,” police wrote.

Video footage showed the impact flinging the two women into the air. Photographs of the Jaguar showed damage consistent with a crash, Washington State Patrol Capt. Ron Mead told reporters at a press conference near the scene of the incident.

The other protester hit was identified as Diaz Love, 32. She remains hospitalized in serious condition. Love was filming the protest in a video broadcast on Facebook Live that showed a group of a few dozen milling about on the highway. Just before the video ended, people began shouting “car.” The impact of the car striking the women can be heard as the broadcast ends.

Both she and and Taylor suffered broken bones and lacerations from the impact, according to the police report.

Kelete was taken into custody after passing sobriety tests. He was described as reserved and sullen. At one point, he asked if the two people that were hit were okay.

Kelete was booked on vehicular assault charges, according to jail records. Bail was denied. It wasn’t clear if the man had an attorney.

Protesters blocked I-5 for 18 straight days leading up to July 4, law enforcement officials said. Mead told the reporters that blocking the highway is illegal and a criminal act.

The state patrol said later Saturday that officers would arrest any protesters who tried to enter I-5.

According to Love’s social media accounts, she participated in other protests blocking the freeway in recent days. The Black Lives Matter supporter was recently at the so-called autonomous zone that protesters created in Seattle.

The activist wrote on July 3 that the weekend was a big one.

Asserting that some groups were issuing death threats against people protesting, she added: “I’ll be shocked if some major tragedy doesn’t take place in one of our protests in the States this weekend.”