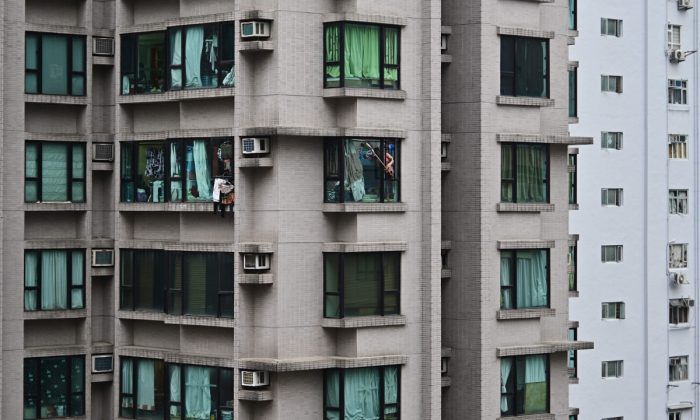 A woman reaching out of a high rise building in China. (Anthony Wallace/AFP/Getty Images)
Social Issues

A woman was seen hanging out of a window from the sixth floor of a high rise condo in a daring escape to flee from her boyfriend’s violence, according to state-sponsored Chinese news outlet The Beijing Times.

After the woman crawled out of the window to hide outside the apartment building, her boyfriend locked her out.

The unidentified woman was later rescued by the fire department in Huai’an City in Jiangsu Province. Videos of the rescue operation were shared on Chinese social media platform Weibo, similar to Twitter, on May 31.

No reports were given if the woman suffered any injuries. All media reports that covered the story said the police are conducting an investigation into the alleged abuse by the boyfriend.

The woman said that her boyfriend attacked her, and in a moment of desperation, fled out the window to hide on the edge of the building, according to The Beijing News.

Later, when she wanted to return inside, she found that her boyfriend had locked the window.

A video shot by bystanders on the street show the woman straddling the sides of the building on the sixth floor. She appears to be on the phone, and has a green rope attached to her waist which came from the fire department.

The rescue crew uses the rope to pull the woman up to the seventh floor as she tries to climb toward the window where a man is waiting.

However, the plan appears to change, and a firefighter coaxes the woman toward the fifth floor. She is seen wearing a large gray belt around her upper waist, to which the green ropes are attached.

The woman can be heard crying during the rescue operation in the audio recordings from the officers.

Then, with her hands clasped around the green rope, she steps one foot out over the edge toward the firefighter. He catches her ankle, then grabs hold of her with both hands. The men from above lower her to safety on the fifth floor.

No information was given on the boyfriend. Media reports said police are conducting an investigation, a phrase used with every case involving police in China.