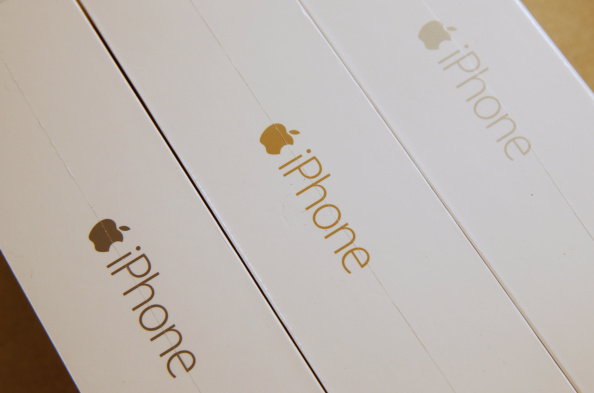 A woman thought she was buying an iPhone 6, but had an unexpected surprise when she opened the box. (George Frey/Getty Images)
US News

The U.S. woman thought she had found a bargain when she saw a truck with a sign that read, “Black Friday sale” near her home in Milwaukee, Wisconsin.

She explained in a video posted on LiveLeak that the man selling the items said that if she bought the iPhone 6 that day, she could have it for $100.

The scammer told her the iPhone was already activated and the first bill was due in December. She took a look at the iPhone, and asked the man to call it, and it rang. So she handed over the money and left with what she thought was her new phone in her box.

It was only when she arrived home and opened the iPhone box that she had an unexpected surprise.

Not only did the iPhone box contain potatoes, the box came with an android charger, rather than one for an iPhone.

“What the heck am I supposed to do with this?” she said.

While Black Friday is a great time for getting a bargain, the woman’s experience is a reminder to be vigilant for Black Friday scams.

Last year, 99 million people went to stores on Black Friday, according to the Better Business Bureau (BBB). Smartphones made up 45 percent of page visits and 24 percent of sales.

The BBB outlined some tips on its website for the busiest shopping day of the year.

-Learn about advertising tricks and gimmicks
-Do your research and read product reviews
-Read the fine print
-Know the advertiser, make sure you are shopping with a legitimate site
-Sign-up for email alerts to get the best deal
-Ask for gift receipts and save warranty information

Consumers can file a complaint on a business or offer that sounds like an illegal scheme or fraud using the BBB scam tracker on www.bbb.org/scamtracker

According to a survey by Consumer Reports, 57 percent of people refuse to shop on Black Friday, calling it “hype and hassle” but 9 percent of consumers love it because they see it as a chance to bag a great bargain.

But if you decide not to take part in Black Friday, there’s always Cyber Monday three days later.