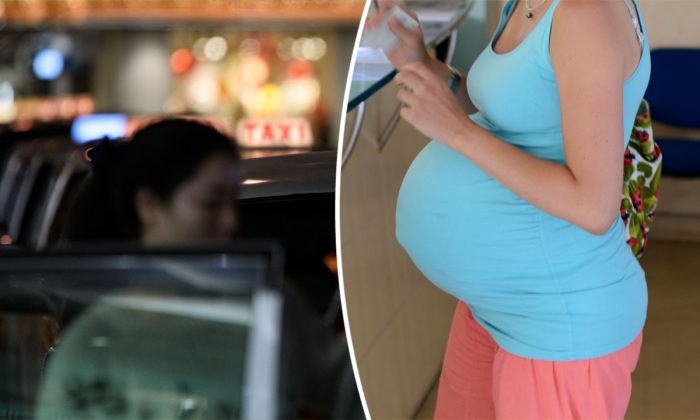 Woman Gives Birth in Back of Taxi While Driver Coordinates Rescue

Security cameras revealed a woman giving birth in the back of a taxi while on her way to a hospital, according to multiple Chinese news outlets.

The woman gave birth to a baby girl, and both were safely taken to a hospital by paramedics on the evening of June 1.

“The woman paid for the ride, but I was just thinking about rescuing her at the time,” Tan told Chinese online news outlet Pear Videos. “So I didn’t accept her payment.”

Cameras showed Tan picking up the unnamed mother-to-be at 10:34 p.m., according to clocks on the in-car security cameras. She was traveling alone with only a backpack.

At about 10:52 p.m., the woman began having intense contractions, according to Sunshine Videos. Tan then called 110, China’s version of 911.

“There’s a pregnant woman in my car, I’m on the highway,” Tan told the dispatcher.

“She’s about to give birth.”

They were 19 miles (30 km) from the hospital. Sunshine Videos reported that the trip may have taken another hour.

The dispatcher asked which highway they were on. He connected Tan to the police in the area. “She’s in a lot of pain,” Tan said, according to Pear Videos.

“The baby’s coming out,” the woman said in the video, her head tilted back as she rubbed her stomach.

“She said the baby’s coming, what do I do?!” Tan shouted after glancing back at his passenger. “Can you rescue her from the highway?”

The woman twists over, facing the side window. “The baby’s coming,” the woman says once again.

“What do I do? The baby’s already out!” Tan shouts once more. “Hurry up, tell me where you’ll get us!”

Tan then exited the highway, and the paramedics were called. “Move it, I’m already at the exit,” Tan yells, as the baby’s first cries are heard in the background.

“Are you off the freeway yet?” the police are heard asking in the video footage. “Hurry, hurry, the baby’s born!” Tan shouts back.

The woman leans forward as the baby cries, and appears to open a razor blade to cut the umbilical cord, according to Pear Videos.

The paramedics arrived nearly 20 minutes later. They took the mother and her baby to the hospital.

Tan said the back of the car was covered in afterbirth, and he had to give up an entire night’s work to rescue her, according to Pear Videos.

“But when I saw the mother and daughter reach safety, I felt it was completely worth it.”