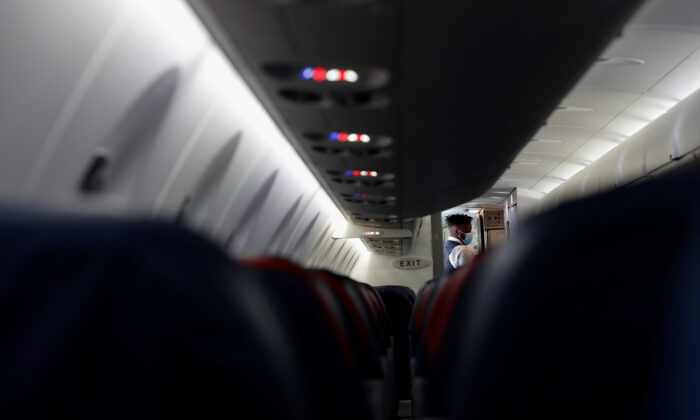 A flight attendant wears a protective face mask as the CCP virus pandemic continues, aboard a Delta flight to Hartsfield–Jackson Atlanta International Airport in Atlanta, Ga., on May 19, 2020. (Shannon Stapleton/Reuters)
Southern California

LOS ANGELES—A Los Angeles woman is facing a federal assault charge Dec. 28 for allegedly hitting and spitting on another passenger on a Delta Air Lines flight from Tampa to Atlanta.

Patricia Cornwall, 51, an actress who according to the New York Post was a Raiders cheerleader when the team played in Los Angeles, made her first appearance in federal court in Atlanta on Monday.

She is accused of “assault by striking, beating, or wounding” a fellow passenger during the Thursday flight, according to the criminal complaint obtained by CNN.

The confrontation on Flight 2790 occurred while Cornwall was returning to her seat after visiting the restroom, but became irritated because a beverage cart was blocking her path. She exchanged words with a male passenger, then allegedly hit him in the head with a closed fist, according to the complaint.

At one point, the man shouted at Cornwall, “Sit down, Karen,” according to video of the confrontation posted online.

The man told an FBI investigator the woman then spit on his face and head area, the complaint states.

In a statement to NBC News, Delta said: “Flight 2790 from Tampa to Atlanta was met by law enforcement after an unruly customer disturbance during flight. Situations like these are rare for the vast majority of our customers and Delta has zero tolerance for unruly behavior at our airports and aboard our aircraft.”

Cornwall was not required to, and did not submit a plea in court during her appearance. If found guilty of the class A misdemeanor, Cornwall faces up to one year in prison and up to a $100,000 fine, CNN reported.

Cornwall, who was an actress and appeared in episodes of “Baywatch” and “Married … With Children” under the stage name Patty Breton, was arrested by police at the Hartsfield-Jackson Atlanta International Airport and was later taken into custody by the FBI, the New York Post reported. A judge ruled during her arraignment that Cornwall can only fly to return home to Los Angeles. She reportedly posted a $20,000 bond at her arraignment.

Cornwall most recently worked as a realtor. The Post reported she received her real estate license in California in 2013 and it expired in 2017. She reportedly has an active profile with Coldwell Banker Realty that lists her as an agent.