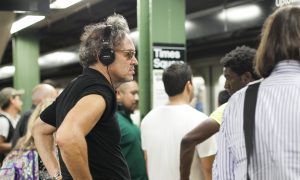 Think About This On Your Next Commute: Traces of Anthrax, Bubonic Plague Found in NYC Subway
0
Share Now
TelegramFacebookTweetEmailTellMeWeReddit
Copy Link
Crime and Incidents

Woman Found Guilty of Shoving Subway Commuter to His Death

A New York City woman will face at least 22 years in prison for shoving a Hindu man to his death off a subway platform in 2012. Erika Menendez, 33, pleaded guilty to first-degree manslaughter in the racially-motivated killing of Sunnando Sen, 46, whom she believed was a Muslim.

According to Queens District Attorney Richard Brown, Menendez said she has hated Muslims since 9/11.

An eyewitness said that Menendez was talking to herself and pacing up and down the subway platform around 8 p.m. on December 27, 2012 as Sen was waiting for the train. Just as the train was pulling into the station, Menendez came up behind Sen and pushed him in front of the moving train.

Sen, who was from India and ran a printing shop, was hit by the train and suffered fatal wounds of multiple blunt force trauma.

It was the second time that month that a commuter had been pushed to his death in front of a moving train.

Local media at the time reported the disturbing confession of the woman, as related by the DA’s office: “I pushed a Muslim off the train tracks because I hate Hindus and Muslims ever since 2001 when they put down the Twin Towers I’ve been beating them up.”

It was the second time that month that a commuter had been pushed to his death in front of a moving train.

“The defendant has admitted committing what is every subway commuter’s worst nightmare—being suddenly and senselessly pushed into the path of an oncoming train,” said District Attorney Brown in a statement on Friday. “The victim was shoved from behind and had no chance to defend himself.”

At her sentencing on April 29, Menendez will be face the prospect of anywhere between 22 and 25 years in prison. Had she been found guilty of murder, she could have faced the punishment of life in prison.