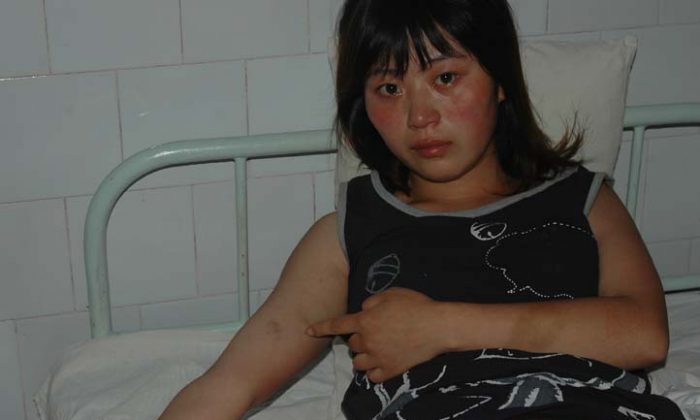 Because Wang Liping did not have a government permit to have a child, she was forcibly taken to have an abortion. (Photo provided by Wang Liping)
China

A 25-year-old unmarried woman was seven months pregnant when staff members from the local government family planning office forcibly took her to a clinic to give her an abortion.

Wang Liping lives in a suburb of Zhengzhou City, Henan Province. She became pregnant in November 2004. Because her boyfriend could not afford a wedding, they did not get married right away. She is the oldest sibling in her family, and her parents were excited about having grandchildren. Without a marriage certificate, however, she could not receive a government permit to give birth.

At about 6 p.m. on May 31, 2005, Wang was stopped on the street by a group of people who identified themselves as staff members from the township family planning office. They forced her into their car and took her in turn to the town clinic, an air force hospital, and Tangli Clinic. All three institutions refused to abort her fetus. At about 11 p.m., they took her to Laoyachen Clinic.

Without her consent or any pre-operation tests, the staff from the family planning office and several doctors and nurses held her arms and pushed her to the ground. She screamed for help. They also beat her, stripped off her pants, and injected a syringe of drugs into her abdominal area. She was then taken to a patient room and tied to the bed.

Wang Liping said, “I was both shocked and scared, and lost all strength to fight back. My calls for help were unanswered. I could not believe such a brutal, horrid thing was happening to me.”

She said that at about 3 a.m. on June 2, after violent pains, the infant was born. The infant cried for a few minutes and then became silent and motionless. At that time, no hospital staff was around to help her. Deeply fearful, she shouted for a while before a yawning nurse appeared.

The nurse asked, “What are you shouting about?”

Wang said, “Could you check on my baby?” The nurse walked over to the bed, looked at the baby, and said, “The baby is already dead.” She then tossed the body aside.

Wang was so shocked by the news that she fainted. When she woke up in the morning, a doctor was standing by her bed and asked her to pay a fee to handle the baby’s remains.

When Wang said that she had no money, the doctor put the body in a plastic bag, put it on her bed and said, “If you have no money, it’s easy, just take the body and handle it yourself.”

Wang was allowed to contact her family only after the baby had died. When her boyfriend and relatives went to the family planning office requesting to see the regulations that authorized such a late-term abortion, the staff ousted them out of the government offices. Meanwhile, Laoyachen Clinic sent them a bill again, asking them to pay a fee for “family planning.”

Wang said, “The doctors and nurses have no sense of humanity or medical ethics. The staff at the family planning office has no conscience or understanding of basic legal concepts. I am almost at the point of a nervous breakdown. Where are our most fundamental human rights? Modern China is the only country in history that requires a government permit to have a child. How many families have suffered because of the family planning policy?”

Anguished, she said, “Since people are eating people now [see note below], I really want to kill these men-eating beasts with my own teeth!”

Note: According to articles circulating on some Chinese web sites, some restaurants cook aborted fetuses and sell them as a tonic.