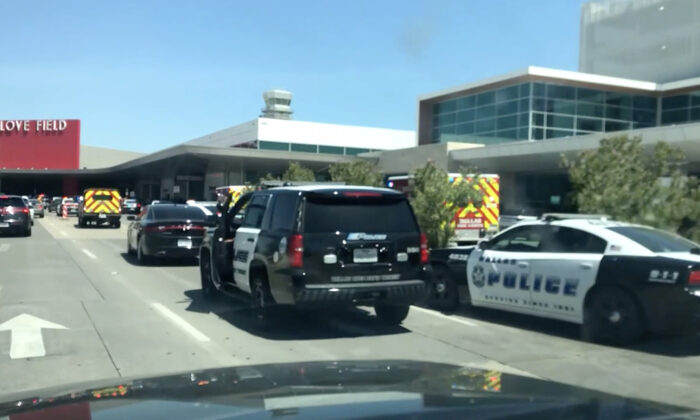 Emergency response vehicles and police cars outside Dallas Love Field Airport after shots were fired on July 25, 2022. (CNN/Screenshot via NTD)
Crime and Incidents

Woman Fires Handgun Inside Dallas Airport, Is Shot by Police

A 37-year-old woman was shot by police after she allegedly fired a pistol inside Dallas Love Field Airport on July 25, authorities said.

Authorities told reporters that the woman, Portia Odufuwa, fired shots near a ticket counter while aiming at the ceiling.

A responding officer shot Odufuwa in the lower extremities before she was taken to the hospital, Dallas Police Chief Edgardo Garcia said at a news conference. There were no other injuries, he said.

“At this point, we don’t know where exactly this individual was aiming,” Garcia said in reference to where Odufuwa was allegedly shooting.

The Federal Aviation Administration (FAA) announced a ground stop at the airport over the incident, which reportedly sent crowds of people running for the exits. The Dallas Police Department wrote on Twitter that the Dallas Love Field Airport terminal was “secure” right before noon local time.

The Transportation Security Administration (TSA) later said it was in the process of re-screening all travelers via the security checkpoint.

Garcia told WFAA that Odufuwa was dropped off at the airport at around 11 a.m. local time. She then went into a bathroom, changed clothes, exited the facility, and pulled out a handgun.

No further information is yet known about Odufuwa’s motivation; also unclear is who took her to the airport.

“We were at the counter checking in and I was trying to check in and we heard someone yelling. And we looked up and we saw her walking down with guns up,” witness Judy Rawle told a Fox affiliate station. “And after talking with someone else, she was upset because her husband had got fired from somewhere and she was going to start shooting us. And then the police came in and apparently she’s been injured is what I was told.”

Rawle said Odufuwa was dressed in black. She fired between eight and 12 shots, the witness added.

Rockwall Police Chief Max Geron wrote on Twitter at about 11:20 a.m. that he “just got evacuated of Love Field after an apparent shooting.”

A video posted to social media showed people hiding behind objects outside the airport.

“We are now outside in between the building and the tarmac and we’re just told there was a shooter and we are going to need to stay outside for a bit,” the user wrote.

Other details about the incident weren’t immediately provided.