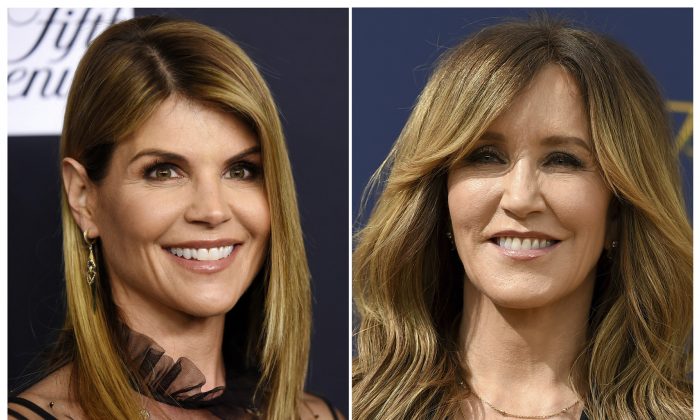 A California woman filed a $500 billion lawsuit against Lori Loughlin and Felicity Huffman over the college bribery scandal.

The woman, Jennifer Kay Toy, also filed a lawsuit against the dozens of other defendants named in “Operation Varsity Blues.” Toy is a former Oakland school teacher who said her son, Joshua, wasn’t admitted to several colleges where the scandal allegedly took place despite him having a 4.2 GPA.

According to the Los Angeles Times, “Joshua and I beleived [sic] that he’d had a fair chance just like all other applicants but did not make the cut for some undisclosed reason,” she wrote in the class-action lawsuit.

“I’m now outraged and hurt because I feel that my son, my only child, was denied access to a college not because he failed to work and study hard enough but because wealthy individuals felt that it was ok to lie, cheat, steal and bribe their children’s way into a good college,” she wrote.

The court filing doesn’t specify what colleges to which her son applied or when he submitted his applications.

Toy’s lawsuit estimates that “due to the length and breadth of the cheating scam,” one million people were affected, the LA Times reported.

Kay Toy added in the lawsuit: “I’m not a wealthy person, but even if I were wealthy I would not have engaged in the heinous and despicable actions of defendants,” ABC7 reported.

Other than Loughlin, the “Full House” and “Fuller House” star, and Huffman, who appeared in “Desperate Housewives,” dozens of other people were named, including CEOs, business owners, a high-level lawyer, and a bestselling author.

The LA Times reported that two Stanford students filed a class-action lawsuit against eight colleges ensnared in the admissions scandal.

Erica Olsen and Kalea Woods, who both go to Stanford, claimed that they were among the students cast aside in the admissions process.

“Had she known that the system at Yale University was warped and rigged by fraud, she would not have spent the money to apply to the school,” the lawsuit stated. “She also did not receive what she paid for—a fair admissions consideration process.”

“At the time she applied, Woods similarly was never informed that the process of admission at USC was an unfair, rigged process, in which parents could buy their way into the university through bribery and dishonest schemes,” the lawsuit added.

The suit claimed that both students had stellar grades.

Loughlin was reportedly dropped from the Hallmark Channel after news of her involvement in the scam broke.

“We are saddened by the recent news surrounding the college admissions allegations,” Hallmark said in a statement. “We are no longer working with Lori Loughlin and have stopped development of all productions that air on the Crown Media Family Network channels involving Lori Loughlin including Garage Sale Mysteries, an independent third party production.”

Both of Loughlin’s daughters were attending the University of Southern California. Loughlin and her husband are accused of paying $500,000 to get them into the school.

“After careful review of recent developments, we have made the decision to end the Sephora Collection partnership with Olivia Jade, effective immediately,” the firm said.