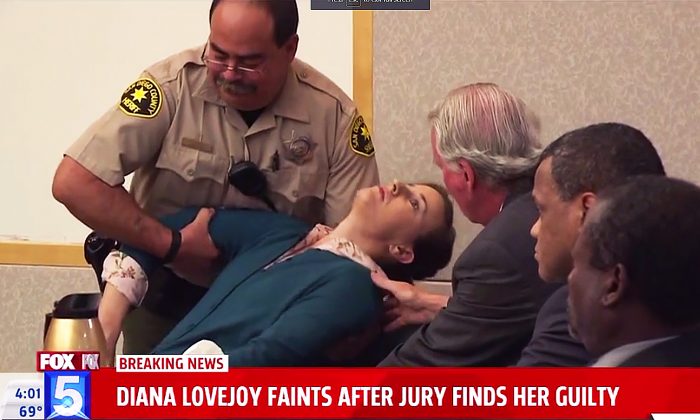 Diana Lovejoy falls back, shocked senseless by the guilty verdict in the murder-for-hire case against her. (Fox5 San Diego screen shot)
Crime and Incidents

A woman accused of hiring a man to kill her husband passed out when the guilty verdict was read in a Vista, California, courtroom on Nov. 13.

Diana Lovejoy, 45, was convicted of conspiracy and attempted murder for hiring ex-Marine Weldon McDavid Jr., 50, to shoot her ex-husband, Greg Mulvihill. McDavid shot Mulvihill on the night of Sept. 1, 2016, but only wounded him.

As the verdict was called, Lovejoy keeled over, falling sideways out of her chair. A deputy pulled her upright, preventing her from hitting the floor. She appeared to be unresponsive. Fox News captured the moment on video.

Judge Sim von Kalinowski called a recess and cleared the courtroom. Paramedics took Lovejoy, handcuffed to a stretcher, out of the courtroom to a nearby hospital, Fox News reported.

After a 30-minute recess, the judge finished reading the guilty verdict against McDavid.

Lovejoy and Mulvihill had spent two years locked in a bitter divorce and custody dispute. Lovejoy had accused her husband of sexually abusing her and molesting their four-year-old son, according to Fox News.

McDavid was an instructor at the Oceanside, California, firing range where Lovejoy was taking lessons. Lovejoy discussed her divorce case with McDavid and had him install a security system in her home.

McDavid testified that Lovejoy agreed to pay him $2,000 to get evidence to use against her husband in the custody battle, but not to harm him. McDavid planned to call Mulvihill claiming to be a private investigator, to arrange a meeting in a dark, secluded place on the pretext of turning over some evidence incriminating him of abusing his wife.

Lovejoy bought a “burner” phone, a prepaid phone with no name on any account, for McDavid to use to make the call.

McDavid claimed that only a guilty person would meet a stranger in a dark, isolated location for such a reason, and Lovejoy could use that in court.

McDavid testified that Lovejoy never suggested violence of any kind.

“It was a hasty plan, a dumb plan, but it was not a plan to kill,” McDavid said in court, according to the San Diego Tribune.

McDavid also admitted that he and Lovejoy had been physically intimate during the planning of the crime. McDavid, who is married and has a newborn son, said, “I regret it.”

Armed, Hidden, and in Camouflage

McDavid called Mulvihill, then hid about 60 feet from the meeting place, wearing camouflage clothing and carrying a loaded AR-15 rifle. During cross-examination, McDavid admitted that he could simply have waited in his car down the street to see if Mulvihill showed up, but thought he would be safer hiding in the bushes.

Mulvihill brought a co-worker and a flashlight to the section of dirt road where the evidence was supposed to be hidden. The pair said they saw movement in the bushes about 60 feet away. Mulvihill flashed the light in that direction and, according to the co-worker’s testimony, they saw a man in the bushes aiming a rifle at them.

One of them yelled, “gun” when they saw the rifle, according to the San Diego Tribune.

McDavid testified that he heard Mulvihill say he had a gun, and he fired his rifle at the light in Mulvihill’s hand.

McDavid’s first shot struck Mulvihill in the side. The pair fled, with McDavid firing half-a-dozen more shots after them.

Too Good a Shooter to Miss

Both McDavid and his lawyer emphasized that McDavid was an expert shot, and wouldn’t have failed to kill his target if that had been his intent.

“The shot that I missed was the flashlight,” McDavid testified. “I did not miss a man-sized target.”

He also said that he “could hit that person—center mass—100 yards away without any problem.”

McDavid’s attorney, Ricky Crawford, described his client as an expert shooter, a former Marine, and School of Infantry instructor.

“Did he try to kill him? No,” Crawford said. “But if he had tried to kill him, he would have done it.”

McDavid also testified that his next six shots were aimed deliberately over the heads of the two fleeing men.

Deputy District Attorney Jodi Breton noted that however expert a gunman McDavid might have been, paper targets don’t move, but people do.

Breton also pointed out that while Lovejoy already had a restraining order against Mulvihill and full custody of their son, after the divorce was finalized, she would have been forced give up sole custody and also pay her ex-husband a settlement of $120,000, according to NBC News.

Breton emphasized that while Lovejoy took no physical part in the murder attempt, she was the one controlling the situation.

Breton said McDavid was acting as if he was in the theater of combat, according to the Tribune, but was actually “operating in the theater of the absurd. And the puppet master of that theater is Diana Lovejoy.”

A particularly powerful piece of evidence was the testimony of Lovejoy’s aunt, Diana Clark. Clark told the jury that Lovejoy had told her she was afraid of Mulvihill, and that she suspected him of abusing their son.

“She said, ‘Aunt Diana, do you know anyone who could do that, either scare him or kill him?’” Diana Clark testified at a preliminary hearing.

“I told her it was a remarkably dumb idea,” Clark continued. “She would never be able to get away with it.”

Jurors Were Not Fooled

Jurors deliberated for two days before finding both defendants guilty.

Lovejoy never took the stand, but Deputy DA Breton made sure the jury understood what she had done.

Jurors said that the testimony of Lovejoy’s aunt, Diana Clark, was a powerful factor in the guilty verdict.

While McDavid testified extensively, he may have been better off if he hadn’t.

“We rejected his story pretty much off the bat,” a 63-year-old male juror who declined to give his name, told the San Diego Tribune. “He was lying. It was getting absurd at times.”

“The defense they were giving just didn’t seem plausible,” forewoman Reed told the Tribune. “It seemed too far-fetched for what actually happened.”