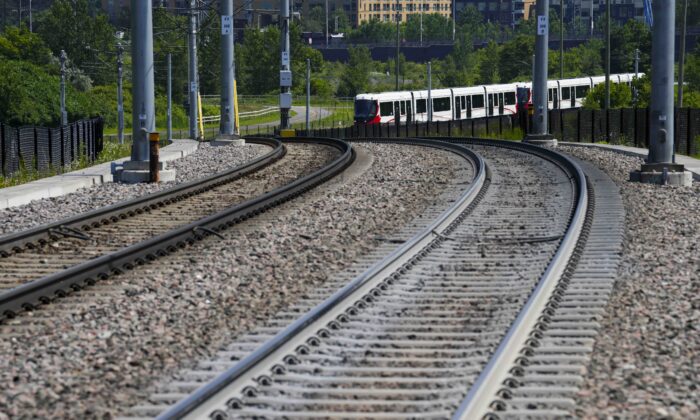 An Ottawa Light Rail Transit (OLRT) train travels along the tracks in Ottawa on June 22, 2022. (The Canadian Press/Sean Kilpatrick)
Canada

Woman Dozes Off on Train Tracks, Escapes Injury as Train Screeches to Halt

A Prince Albert, Sask., woman has narrowly escaped serious injury after falling asleep between a set of train tracks.

Deputy Fire Chief Alex Paul said it was a matter of inches between the bottom of the train engine and the woman as the train came screeching to a stop on top of her Thursday morning.

“The train coming along, at the last minute realized that it was a person on the tracks and they applied the emergency brake,” said Paul. “The locomotive came to a stop just a little bit over the top of the person, so there was no actual contact.”

Paul said fire crews were able to free the woman from under the train and she was transported to hospital with only minor injuries.

He said if the train had gone much farther it could have been fatal.

While the tracks are private property and marked with no trespassing signs, Paul said it’s still common for people to take shortcuts through the rail yard.

“It’s never safe to be walking near train track,” he said. “You never know where a train may come, and there’s multiple tracks side by side.”

The tracks are operated by Carlton Trail Railways.

The Transportation Safety Board of Canada says there were 39 trespasser fatalities in 2020. (CTV Saskatoon)