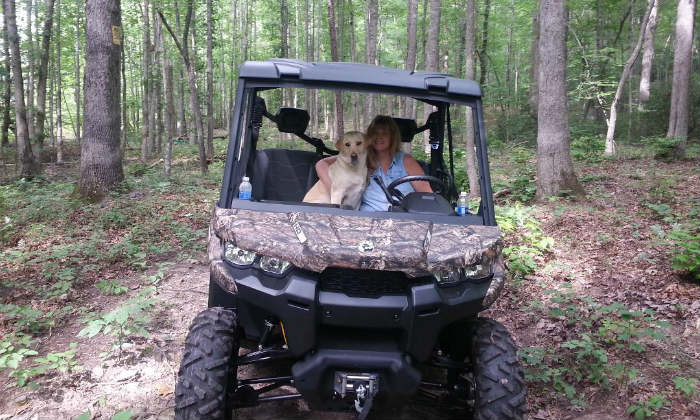 Marilyn Holley with her dog, Lucy, in Gretna, Virginia, where she believes she was bitten by lone star ticks. (Marilyn Holley)
US News

Woman Discovers She Has a Strange Allergy to Red Meat

When Marilyn Holley took a bite of her beef taco earlier this year, she didn’t expect to have a severe reaction like the intense abdominal pains, vomiting, diarrhea that ensued.

“I thought I had a virus because my boyfriend wasn’t sick so I knew it wasn’t contaminated food,” she said.

Two weeks before, Holley, a business analyst for a healthcare insurer, was camping with her boyfriend Edward Spalding at their property in Gretna, Virginia, over Labor Day weekend when she found tick bites on her feet.

Three days after her reaction to beef tacos, Holley, who lives in Virginia Beach, Virginia, ate a pastrami sandwich followed by a slice of cheesecake and suffered similarly severe symptoms.

“About six or seven bites into my pastrami sandwich, I started getting the same abdominal pains, and I ended up breaking out in severe hives and getting sick in my stomach again,” she said.

It took a specialist, who Holley tracked down online, to diagnose her with a rare allergy to red meat that is associated with bites from the lone star tick. The doctor, Dr. Robert Radin, told her that the condition could take decades to go away, if it does at all, she said.

The mystery allergy has only been known about since around 2004, and is sometimes known as Alpha-Gal syndrome or Mammalian Meat Allergy.

Symptoms can include anaphylactic shocks, stomach pain, hives, and swelling. In some cases, it can lead to death.

Not everyone who is bitten by the lone star tick is affected. Some people have stronger reactions than others, and no one knows why.

Unfortunately, the allergy is likely to spread as the lone star tick is cropping up in more places.

It used to only live in the Southeast, but over the past decade it has been reported in the Midwest and even as far north as Maine. One theory as to why it is spreading is that the population of white-tailed deer, which is the most common host for the ticks, has been on the rise.

For most people diagnosed with the illness, it’s a life-altering event, as mammal meat is found hidden in many things, like the gelatin in Jello or medicine capsules. People can also become sensitive or allergic to dairy, although it’s “hit and miss,” Holley said, depending on the person.

Holley is concerned that many people could have the allergy but don’t know about it. Part of the problem is that is that it can take several hours before reactions to the meat set in, so people don’t always link it to what they’ve eaten.

It’s unknown exactly how many people have the allergy. A closed Facebook group created for people to share their experiences of having Alpha-Gal has about 3,800 members. Over 2,000 people from all over the world have self-reported cases, according to this map, with the majority being in the United States.

She wants to spread awareness about the mystery condition in hopes that people will quickly see an allergist if they suffer Alpha-Gal symptoms after eating meat.

“My boyfriend doesn’t have a problem. Is it because he’s not the same blood type as me? [Doctors] don’t even know that. It’s just crazy,” she said. “The hospitals don’t know, the patients don’t know and the doctors don’t know. And no one’s doing anything about it.”

Holley emailed the U.S. Centers for Disease Control and Prevention (CDC) about research on the allergy. In an email seen by The Epoch Times, the CDC confirmed that they are not currently researching it.

“It’s not yet known how the allergy starts, other than it could be related to the lone star tick bite,” a CDC staff member wrote.

Holley hopes that the CDC can find funding for the research so that both victims of the allergy and doctors will know more about it.

“People don’t understand that this can affect anyone if you walk out and get bit by a tick,” Holley said. “I think it’s going to become some kind of tick-borne epidemic. It’s not going to be like the flu, or something. It’s going to be big like lyme disease.”