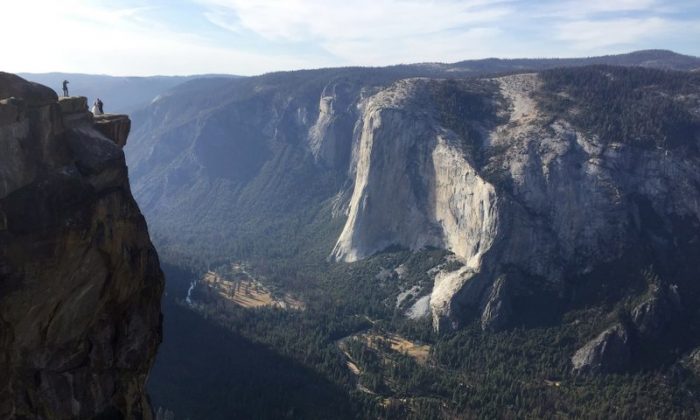 In this Thursday, Sept. 27, 2018 file photo, an unidentified couple gets married at Taft Point, upper left, in California's Yosemite National Park. A Northern California coroner says a young couple from India was intoxicated when the pair fell to their deaths from the scenic overlook in Yosemite. Autopsy reports provided by the Mariposa County sheriff's department Friday, Jan. 18, 2019 concluded that 30-year-old Meenakshi Moorthy and her husband, 29-year-old Vishnu Viswanath, were both "intoxicated with ethyl alcohol prior to death." (AP Photo/Amanda Lee Myers, File)
Northern California

A woman visiting Yosemite National Park was killed by falling rock and ice while hiking on a closed trail, the park said in a statement on Feb. 25.

The incident happened on Sunday, Feb. 24, around 12:30 p.m. Xuan Wang from Cupertino, California, was walking on the Mist Trail, which leads to Vernal Fall.

“The Mist Trail, a popular trail from Yosemite Valley to the top of Vernal Fall, is closed this time of year due to icy and hazardous conditions,” said the statement. “The trail closure is clearly marked and there is a gate on the trail reminding visitors of the closure.”

At approximately 12:30 p.m. on Sunday February 24, 2019, a park visitor died as a result of being struck by falling rock and ice on the Mist Trail in Yosemite: https://t.co/4GTMM2MSzF.

The park says Wang didn’t follow the instruction on the signs but walked around the gate blocking the trail. She was later hit by falling rocks and ice and died from injuries soon thereafter.

The park didn’t provide further information about the incident, saying it is still under investigation.

Trails are subject to closure when there are “hidden hazards or when they are impassable due to rock fall, snow, ice, or fire,” the park said on its website.

Since early February, the park has received a substantial amount of snow due to several waves of storms, impacting the park’s campgrounds, roads, and ski area.

But the snow didn’t shun people away from the park, especially after the astonishing “firefall” phenomenon that reappeared in the park in this February, attracting photographers and visitors from all around the world to see the incredible but transient scene.

The Yosemite Firefall happens from mid-to-late February each year. https://t.co/u6gCAraLXw via @AFARMedia pic.twitter.com/BjcNgqARtk

The “firefall” occurs when the setting sun casts light on a seasonal waterfall named Horsetail Fall located on the east side of El Capitan. In winter and early spring at sunset, Horsetail Fall can be seen glowing orange and red as if lava is flowing off the cliff when the sun illuminates the waterfall.

It is considered rare to witness the “firefall” as it requires the right timing, position and conditions to observe the scene that lasts only about 10 minutes.

The “firefall” phenomenon is expected to end by this weekend.

The Mist Trail also witnessed another fatality about two months ago. A Los Angeles man was found dead near the Mist Trail after falling down from a steep rocky area above Vernal Fall on Chrismas Day.

The victim was later identified as 32-year-old Joshua Brock Conner, who was a registered nurse living in Los Angeles.

Another recent fatal incident happened in last October when a young couple from India fell off a 1,000-foot cliff while taking a selfie in Yosemite.

The couple, Menakshi Moorthy, 30, and her husband Vishnu Viswanath, 29, was killed in the fall. Their bodies were found 800 feet (245 meters) below popular Taft Point in Yosemite.

The coroner found both died of multiple head and internal injuries caused by their falls. However, in January, an autopsy report found each victim had intoxicating levels of alcohol in their bloodstreams.

Ten people have died in Yosemite in 2018 lone, six of whom fell to their deaths.