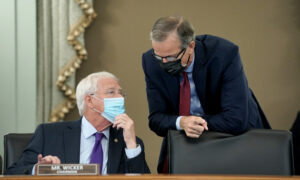 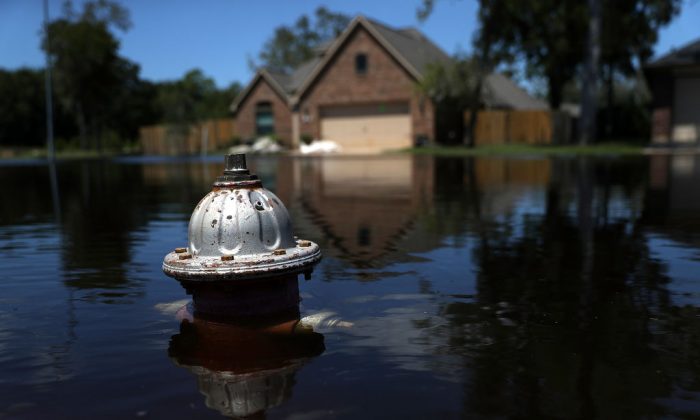 The top of a fire hydrant sticks out of floodwaters in front of a home on in Texas. (Justin Sullivan/Getty Images)
US News

A woman died of flesh-eating bacteria she contracted from Hurricane Harvey floodwaters.

Nancy Reed died on Sept. 15 after a tear in her skin resulted in a necrotizing faciitis infection, an autopsy report revealed. Necrotizing faciitis is popularly known as the flesh-eating disease. The disease infected the 77-year-old woman after she fell and broke her arm at her son’s home, the Houston Chronicle reported.

Friends describe Reed as a force in her community, USA Today reported. Reed was a donor and volunteer at her church and worked with several nonprofit organizations, including Village Learning and Achievement Center, an educational center for adults and children with disabilities.

“God has gained an amazing angel,” said Tina Tilea, administrative specialist at the center. “We’re going to miss her.”

“It was difficult to learn because we saw her a lot, very often, at all of our events,” said the center’s Development Manager Erica Badamo.

“It’s tragic,” said Dr. David Persse, director of emergency medical services for Houston. “This is one of the things we’d been worrying about once the flooding began, that something like this might occur. My heart goes out to the family.”

Former firefighter and medic J.R. Atkins also contracted the flesh-eating bacteria when he headed out to check on people in his community during the flooding, NTD TV reported. He contracted the disease from infected water that got in through a mosquito bite. Due to his experience and knowledge, he was able to recognize the onset of the illness. He got appropriate treatment and survived.

The disease is extremely rare. It usually enters through a break in the skin. People in flood-affected areas have to be cautious due to debris in the floodwater that can open a wound. Treatment includes surgery and antibiotics.

Since 2010, about 700 to 1,100 new cases appear each year in the United States, according to the Centers for Disease Control and Prevention (CDC). The CDC describes initial symptoms to be aware of in recognizing necrotizing fasciitis.

“People with necrotizing fasciitis often start having symptoms within a few hours after an injury. The symptoms may seem like another illness or injury. For example, some people may complain of pain or soreness, similar to that of a ‘pulled muscle.’ The skin may be warm with red or purplish areas of swelling that spread rapidly. Some people get ulcers, blisters, or black spots on the skin. Patients often describe their pain as severe and hurting much more than they would expect based on how the wound looks,” states the CDC.

There was one other reported death resulting from contaminated Hurricane Harvey storm water, but it was from sepsis. A 64-year-old man died from the infection after standing in floodwater.