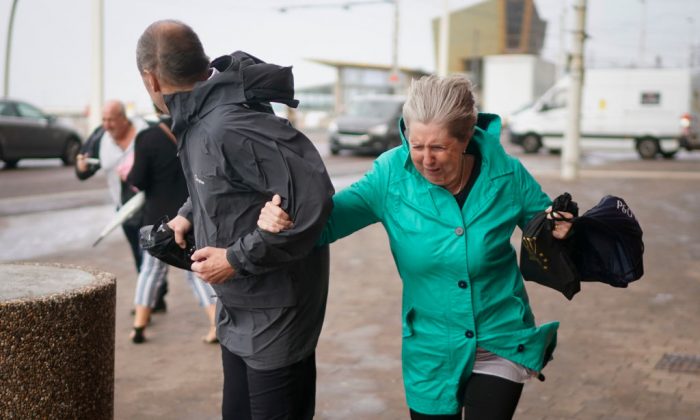 LONDON—A woman has died after being blown off a cliff in the Republic of Ireland, Irish police confirmed.

The woman was in her 50s died after a caravan was swept off the cliff in the west of Ireland on Sept. 19.

Irish police told PA, “At approximately 7:45 a.m., a report was received that a caravan had blown off the cliff. A search was carried out at the scene on the beach and after a short time the body of a female in her 50s was recovered.”

The woman is understood to have been a tourist who was staying at a campsite in County Galway.

The incident comes as Ireland feels the brunt of Storm Ali, with winds of up to 90 mph across the country and parts of England and Scotland.

Around 200,000 homes and businesses have been left without power, according to the BBC, with an amber warning for people in Northern Ireland, Scotland, and northern England to “be prepared.”

The warning is in place until 5 p.m. local time, with the amber warning indicating that lives could be at risk.

UK Met Office chief meteorologist Laura Paterson said in a statement, “The strongest winds will gradually ease from the west through this afternoon as Storm Ali moves quickly off north-eastwards, reaching the Norwegian Sea this evening.

“Through Thursday another area of low pressure will develop and approach the UK from the southwest, bringing rain and second spell of strong winds later on Thursday.”

In Scotland, the Forth Road Bridge has been closed, Traffic Scotland said, with Scotland, northern Wales, and northern England set to face winds of up to 60 mph.

Rail operators shut the Highland mainline in Scotland after a freight train was derailed in the high winds.

In the port of Greenock, Inverclyde, a cruise ship came away from its moorings. Oceania Cruises said, according to PA, “This afternoon, the … Nautica encountered extremely strong winds, which resulted in the parting of mooring lines and the vessel being detached from the dock. All guests and crew onboard are safe and there were no injuries.”

The unsettled weather is due to remain for the rest of the week, according to the Met Office, but is expected to improve early next week.

Storm Ali is the first storm to be named by the Met Office this season.