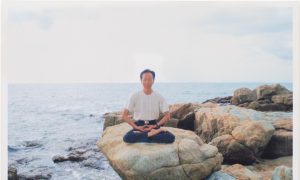 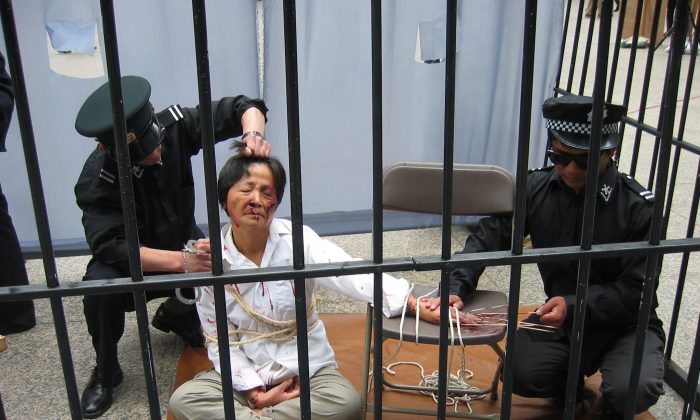 A reenactment of a Falun Gong practitioner being tortured by police in a detention center. (Minghui.tv)
China Human Rights

Before she succumbed to her injuries, Liu Zhenfang filed a criminal complaint recounting her ordeal—a harrowing description of how the Chinese communist regime destroyed her body, but could not break her faith—over twenty long years.

Liu, a 60-year-old resident of Huangchuan County, Henan Province passed away on Dec. 7, 2018, three months after her release from Henan Women’s Prison, according to Minghui.org, a U.S.-based website that serves as a clearinghouse on the persecution of Falun Gong in China.

Her body was emaciated, and most of her internal organs had festered.

In 2017 Liu had been sentenced to a 1.5-year prison term for practicing Falun Gong, a spiritual discipline which upholds the tenets of truth, compassion, and forbearance. Those who subscribe to this belief have been persecuted by the Chinese communist regime from 1999 to the present day.

Liu, a hairdresser, began practicing Falun Gong in 1998 after hearing about its health benefits at a time where China’s health reforms were outdated.

Falun Gong, which translates to “law wheel practice,” is a spiritual discipline with a set of meditation exercises and texts that preach virtues, containing moral philosophies with Buddhist and Taoist elements, and draws on China’s long tradition of qigong, a regimen of controlled breathing and gentle physical movements.

When then Chinese Communist Party (CCP) leader Jiang Zemin launched a systematic campaign to vilify and destroy Falun Gong in 1999, Liu refused to renounce her faith, and became a police target. Her house was ransacked three times between 1999 and 2003.

In early 2000, Liu was detained in the Hedian Detention Center, where police extorted 2,000 yuan from her before she was released.

Her second arrest in 2001 saw police bring her to a secret detention facility after finding Falun Gong materials in her home. Liu was forced to stand overnight without sleep, and the police took all the money she brought with her.

Police interrogated Liu for the source of the materials, and she was beaten for more than 20 hours for her silence. Her head was slammed against a wall, and clumps of hair were pulled out, resulting in scalp injuries. She was hung from the window frame with handcuffs and beaten until she vomited blood.

She was sent to the Hedian Detention Center again and held for three months, until her family paid the deputy director at the Domestic Security Division to secure her release.

In 2004, Liu was arrested for distributing Falun Gong materials. Following her incarceration, she was beaten for 16 hours by police at the Guangshan Police Department.

They pulled her hair and ripped her clothes. When the officers became tired of beating her barehanded, they used a metal rod and took turns hitting her until the rod was broken. They used the broken metal rod to beat her fingers.

Then she was taken to the Guangshan Detention Center, where she was beaten for 33 hours. Her internal organs were damaged, and following these attacks, she often vomited blood.

The police also detained Liu’s husband in 2004 for five months, despite him not being a Falun Gong practitioner. He was forced to do slave labor and was given one meal per day. Guards tied his testis with a thin thread and burned it with a lighter.

Liu was arrested again in 2012. She was sentenced to a five-year prison term, where her ordeal continued. Despite her injuries, she was forced to work for 14 hours every day.

In 2017, Liu was handed another prison term for 1.5 years, and it would end up killing her.

During Liu’s total time in incarceration, she was also verbally abused, fed nerve-damaging drugs, forced to do slave labor, stand for days without sleep, and squat for hours with her hands on her head.

Before the persecution, Falun Gong had an estimated 70 million to 100 million adherents in China across every social class, including members of the communist party. Meditating practitioners were a common sight in parks and public squares in every city.