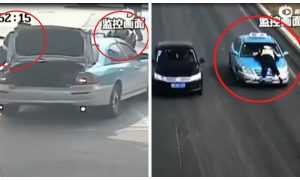 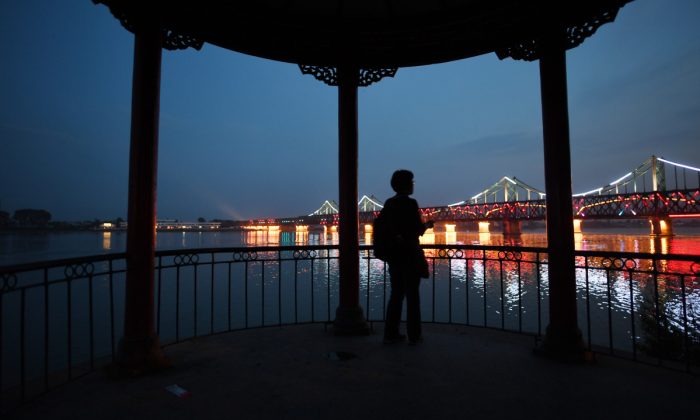 A woman looking at a bridge in China. (Greg Baker/AFP/Getty Images)
Social Issues

On a late and rainy night, a taxi driver stopped to help a woman who was injured and soaked in blood, according to Chinese news outlet Sichuan Satellite TV. When the woman got into the taxi, instead of taking her home as she requested multiple times, he immediately drove her to a hospital for free.

After the video footage of their interaction was shared online, it received many positive responses on Chinese social media.

Wu Wenjun is a taxi driver in the Chinese city of Chengdu, located in Sichuan Province. At around 3 a.m. on May 29, he spotted a woman who was walking alone and looked injured.

“I saw a woman walking barefoot on the Sandu Water Bridge,” Wu told Sichuan Satellite TV. “It was raining at that time, and since it was late at night, I was driving fast, and I drove past her.”

“When I drove past her, I saw that her whole body—she was soaked, walking barefoot.”

Wu said that he felt it was far too dangerous for a woman to be walking around like that, so he turned his car around and pulled over in front of her. The woman, who was unidentified in the reports, got into Wu’s taxi, and surprised him with her desperate situation.

A video from the taxi’s surveillance camera shows the interaction between Wu and the woman. “What are you doing covered in so much blood?” Wu asked as he looked back at her sitting in the back seat.

“Take me back home,” the woman said.

“It’s best that you go to a hospital,” Wu replied. But the woman repeats that he should simply take her home. Wu then asks her how she got into this situation.

“I had a fight with my boyfriend,” she said.

“I’m going to take you to the hospital, you’re bleeding way too much,” Wu said. And once again, the woman says that he should just take her home.

“No way, no way. I must take you to the hospital,” Wu insisted.

Then Wu starts driving. “I’m not kidding. I’m taking you to the hospital for free,” he said. The woman once again tells Wu to take her back, saying that she’ll drive home on her own.

Then Wu decides to make his point.

He raises his voice and says: “Look at you! You haven’t even seen how much blood you’re losing! I’m taking you to the number five hospital.” Wu then appears to put the address into his cellphone.

Schools and hospitals in China are often given numerical values in their name to define their rank. That is, she was being sent to the fifth best hospital in the area, as defined by the local government.

The woman refuses him once more, saying she’ll drive her own car, but Wu doesn’t accept. “There’s no way, since you’ve got into my car, I will only take you to the hospital, you don’t have to say anything else,” Wu said.

After they arrive, Wu made sure she received medical treatment. “After she got out of the car, she was handed over to the doctor, and they took her to administer first aid,” Wu told Sichuan Satellite TV. “After about 10 minutes, I left the hospital.”

Wu left without telling anyone, and only became known for his kind act through the video being shared online.

However, the fate of the woman is unknown and the reports did not elaborate on her injuries.