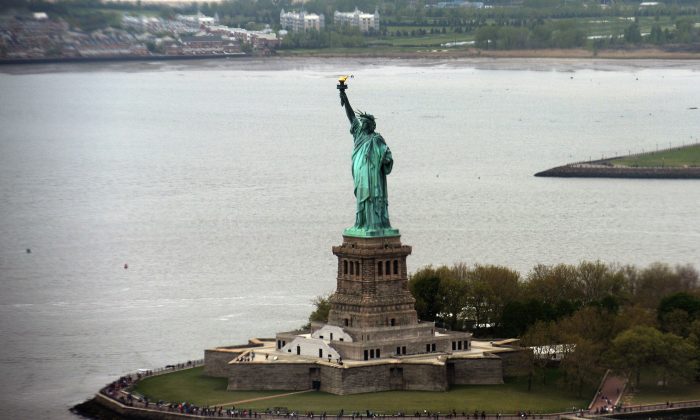 The Statue of Liberty is pictured in New York, on May 14, 2014. (Jewel Samad/AFP/Getty Images)
US News

A person has scaled the Statue of Liberty, apparently as part of a protest on Independence Day.

The person is seen moving around near the feet of the statue, according to helicopter footage. Police are trying to persuade the person to come down.

According to Pix11, two officers used a ladder to climb the statue and are talking with the woman.

The woman climbed the statue less than an hour after protesters at Ellis Island unfurled a banner with the words, “ABOLISH ICE,” referring to the U.S. Immigration and Customs Enforcement agency, NY Post reported. She was apparently seen wearing a “Rise and Resist” shirt, but the group said that she has “no connection to our #abolishice action earlier today”

A woman who was visiting the Statue of Liberty when the incident unfolded that the island was “evacuated of all tourists,” according to social media posts.

CBS News, citing park police, later confirmed that Liberty Island was evacuated. Sgt. David Somma of the U.S. Park Police told the news outlet that the woman is refusing to come down.

She “keeps changing locations” and officers aren’t able to talk to her, Somma said, adding that her actions are a “threat to public safety.”

“Crazy scene at the Statue of Liberty right now. Woman ‘protesting’ scales the side of the monument,” wrote another person on Twitter.

At the Statue of Liberty pic.twitter.com/mBxzQzBSGi

Crazy scene at the Statue of Liberty right now. Woman “protesting” scales the side of the monument. pic.twitter.com/R0C00AEJXA

Just trying to see the #statueofliberty and some idiot shut the entire island down trying to climb it. pic.twitter.com/WyzAFBdCol