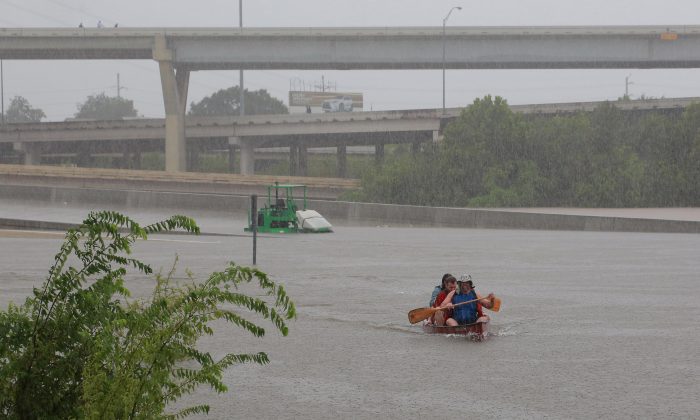 Area residents use a kayak to rescue motorists stranded on Interstate highway 45 which is submerged from the effects of Hurricane Harvey seen during widespread flooding in Houston, Texas, U.S. on Aug. 27, 2017. (REUTERS/Richard Carson)
US

A woman in Texas has alleged that Red Cross workers treated her poorly after she tried to bring 400 hamburgers to Hurricane Harvey evacuees at the Jack Brooks Regional Airport.

Lindsey Scott, in a Facebook post, said a husband and wife Red Cross team “berated” and “accosted” her for bringing the burgers, and she added that she was “astonished at the behavior of the Red Cross.”

“I was trying to bring 400 warm hamburgers to our hungry evacuees, who according to them did not need the food because they had ‘already had a sandwich,'” she wrote.

“Yes, they had 1 sandwich in 24 hours. They were desperate for a hot meal! The Red Cross proceeded to try and load the warm, ready to eat burgers into an ice chest,” she claimed.

She felt bad for the pilot, “who had donated his time, fuel, money, plane and arranged the delivery of the burgers.”

“I confess I just stood there with my mouth gaping open, fighting back tears while they told me that I did not know what I was doing and they had not even seen me volunteering. This is not a normal reaction for me but either exhaustion or pregnancy hormones got the best of me because I simply couldn’t find the words to fight back,” Scott continued.

The Red Cross has not issued a comment on the alleged mishap.

Many large Texas employers, universities, and transit services are reopening or beginning full service on Tuesday, Sept. 9, the day after Labor Day. Some for the first time since Harvey struck the state on Aug. 25, Reuters reported.

The storm first hit Corpus Christi in the south and traveled up the coast, dumping up to 51 inches of rain in places across the region and flooding homes and businesses.

Texas residents who fled to Austin, San Antonio, and Dallas ahead of the storm returned to check on their homes as flooded streets drained.

Houston Metro, a regional transit provider, said it would open all its parking lots and rush-hour lanes on Tuesday.