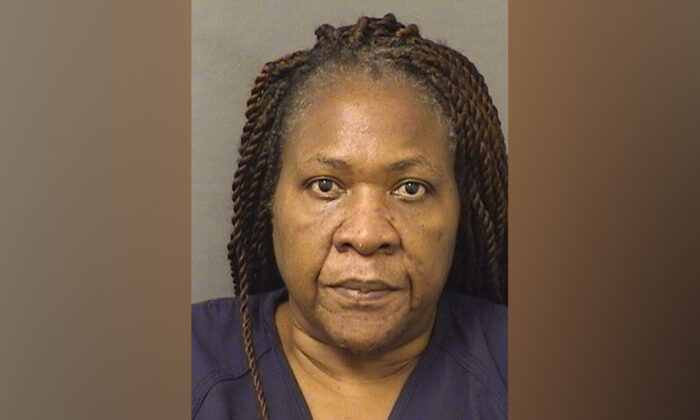 A Florida woman has been charged with first-degree murder for allegedly stabbing her 62-year-old husband to death with a knife and a meat cleaver, police said.

Joan Burke, who is 61, was reported to police on Feb. 11 by Ricardo Green, the victim’s 41-year-old stepson, the Palm Springs Police Department said in a statement, local news agency WPTV reported.

She appeared before a judge on Feb. 20 in a video conference and was ordered to be held without bond.

Green told authorities in a 911 call that he found his physically disabled stepfather, Melvin Weller, in the kitchen lying in a pool of blood after returning from work.

According to a medical examiner’s report, the victim suffered about 140 stab wounds spread all over his body. He also had a skull fracture caused by a blow to the head with a meat cleaver.

Officers arrived on the scene and found a couple of knives and a meat cleaver in the sink. The kitchen also had blood splattered throughout the room, according to a police report.

They later found Burke lying in a bedroom with cuts to both hands, which is common in repeated stabbing cases as blood from the victim can make the knife handle slippy, resulting in the stabber losing grip and causing lacerations to the hands.

“It is very common for the offender to have lacerations to the palm of one or both hands when he or she stabs another person,” police said.

The suspect was taken to a hospital for evaluation before she was taken into custody following an investigation into the deadly stabbing. No motive for the murder was immediately released.

“He was always pretty friendly if he passed by, and if me and my dad were outside, he would just wave to us,” Isabella Jaramillo told WPTV. “It’s crazy to think that somebody could do that to somebody else.”