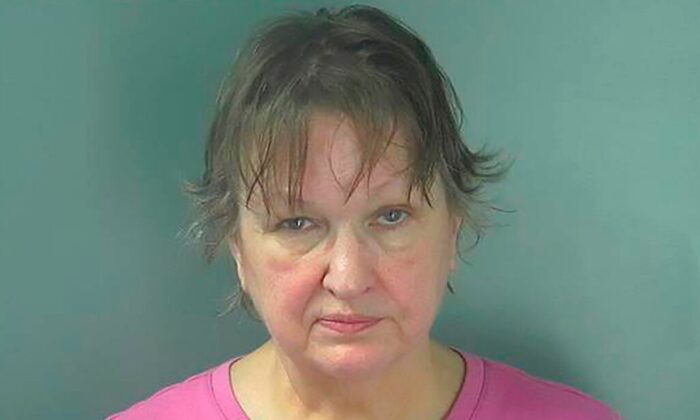 INDIANAPOLIS—An Indiana woman was charged Thursday in a hit-and-run crash that sent one woman to the hospital and caused minor injuries to a man during a southern Indiana protest over an alleged assault of a black man by a group of white men.

Prosecutors charged Christi Bennett, 66, with two counts of criminal recklessness, both felonies, and two counts of leaving the scene of an accident, one a felony and the other a misdemeanor, court records show. She was charged after being booked into the Monroe County Jail and released on a $500 cash bond, Monroe County Sheriff’s Deputy Barry Grooms said.

Bennett’s first court appearance is scheduled for July 17. She could not immediately be reached for comment.

The confrontation happened near the Monroe County Courthouse in Bloomington, about 50 miles (80 kilometers) southwest of Indianapolis, on Monday evening.

Twenty-nine-year-old Chasity Mottinger was injured when Bennett’s red Toyota Corolla accelerated into her, launching her onto the hood, according to the probable cause affidavit. A 35-year-old man, Geoff Stewart, then grabbed the driver’s side of the car and held on as the vehicle accelerated. Both were eventually flung to the ground and the car drove off. Bennett never stopped, charging documents indicate.

Authorities have not disclosed a motive for the attack.

Mottinger was knocked unconscious and cut her head. She was hospitalized, police said, although no updates have been made about her condition. Stewart had scrapes to his arms.

Stewart told The Associated Press he tried to speak with Bennett and navigate her car through traffic after the protest ended. Seconds after he approached her car, Bennett revved it forward, he said.

“I’m really disappointed that she was released on such a small bond with her history of violence,” Stewart said. “This just adds to the concerns the community has had lately—but actually for a very long time—regarding violent white individuals not receiving proper attention from law enforcement, like the men last weekend.”

Bennett, who is white, has previously been convicted of other felonies, including stalking, according to court records.

Bloomington Police Department investigators determined Wednesday that Bennett, the woman the car was registered to, was staying at a motel in Scottsburg, Capt. Ryan Pedigo said in a news release. Investigators found her exiting a motel room and took her to Bloomington to be interviewed, he said. She and her lawyer declined to provide a statement to investigators, according to Pedigo.

Police say her driver’s license shows her as living in Greensburg, but that she has been living at the motel for at least a year.

The protesters had gathered Monday to demand arrests in an alleged assault on Vauhxx Booker, a civil rights activist and member of the Monroe County Human Rights Commission, by a group of white men at Monroe Lake near Bloomington over the Fourth of July weekend. Booker said the men pinned him against a tree, shouted racial slurs and one of them threatened to “get a noose.”

The FBI has said it’s investigating the reported assault. Monroe County First Deputy Prosecutor Jeff Kehr said Thursday afternoon that the prosecutor’s office is still reviewing the Booker case. No charges have been filed yet, he added, with none expected Thursday.