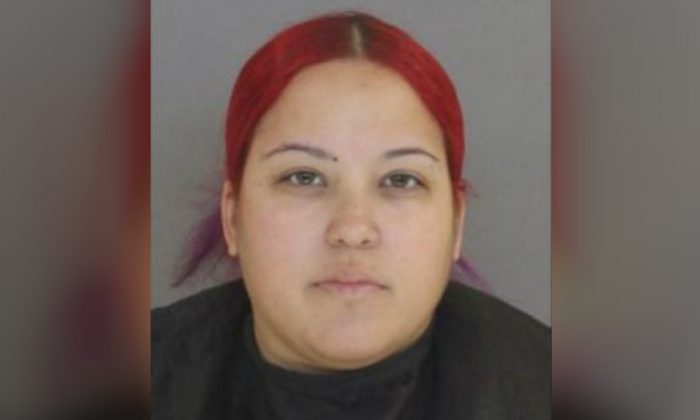 A woman has been charged with child cruelty after posting a video to Facebook of herself pouring water onto a sleeping nine-month baby, as “payback.”

Caitlin Hardy, 33, was arrested by the Sumter County Sheriff’s Office in South Carolina on Jan 29., according to local reports.

Although the original video has been taken down, copies and screenshots have been circulated on social media.

The video shows the sleeping baby having water poured from a plastic bottle onto its face to the sound of an adult giggling. The baby struggles to all fours, moves around a little, to the sound of snickering, then lies down on its side about 30 seconds later and appears to go back to sleep.

Water is again poured on the baby, which wakes up coughing and crying to the sound of laughter.

Screenshots show that the original post was captioned, “Payback for waking me up all kinda times of da night.”

WE DID IT!!! TY ALL FOR HELPING US!!!Sumter woman charged after pouring water over sleeping baby, deputies saySUMTER…

The video appears to have been picked up by a Facebook account called ‘Where is baby Kate?’ which says it was set up to raise awareness of child abuse.

“We received a message from a concerned member yesterday about a woman posting a video of her pouring water on her baby’s face,” said a message on the account.

“I asked the concerned member if she could take a video of it and they did it for me within seconds, as soon as the member got the video the ‘mom’ took it down.”

The video was originally shared privately.

“The charge against this defendant will be prosecuted to the full extent of the law,” Sheriff Anthony Dennis said in a statement, according to Greenville News.

The Sheriff’s Office said it notified the county’s Department of Social Services “for the benefit and safety of all children in this home.”

South Carolina state law defines the crime of Child Cruelty as, “Whoever cruelly ill-treats, deprives of necessary sustenance or shelter, or inflicts unnecessary pain or suffering upon a child or causes the same to be done, whether the person is the parent or guardian or has charge or custody of the child.”

According to state legislation, the charge of child cruelty carries a maximum sentence of 30 days and a maximum fine of $200.

Many social media users were enraged by the video.

“Someone please give me this baby!!! She can wake me up all night!! So sad! Praying for the sweet baby!” wrote one commentator.

Another person wrote, “So, this is what she does to this baby ON CAMERA??? Just imagine what [expletive] goes on behind closed doors when the damn camera is OFF!”

Babies under the age of one are more likely to suffer some kind of child abuse than any other age.

Child Abuse in the United States

According to a report published by the U.S. Department of Health & Human Services (pdf), approximately 3.5 million children nationwide in 2016 were the subjects of at least one maltreatment reports to authorities.