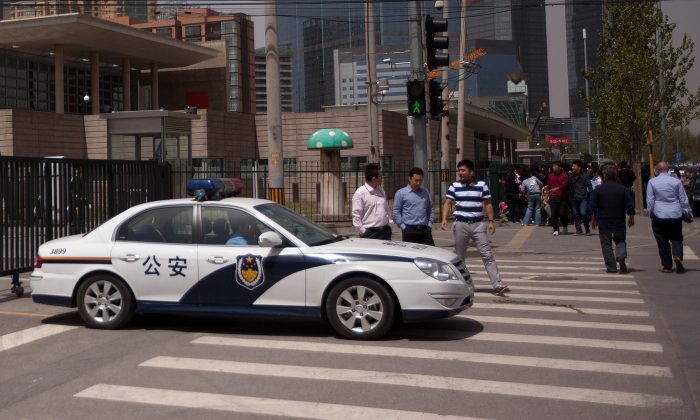 Woman Bleeds on Street After Boyfriend Allegedly Stabs Her Over Dispute

A man is suspected of stabbing his girlfriend three times on a public street in broad daylight after a relationship dispute, according to Chinese online news outlet Passion News. The suspect was detained, and the woman survived.

The man, surname Tan, allegedly attacked the woman after an “emotional dispute” on July 7 at about 7:45 a.m., according to police in the city of Foshan. The woman, surname Zhou, was taken to a hospital in China’s Guangdong province.

Eye witnesses said that man was very violent, and that people were shouting to the man, “Don’t kill [her],” according to Passion News. Reports did not elaborate on the dispute between the couple.

None of the eyewitnesses appear to have attempted to intervene in the incident.

Zhou had likely already been stabbed at this point, given that she was leaning over, holding her stomach with her hand, and her dressing darkening in color.

Blood can be seen pooling on the ground as Zhou continues to hobble backwards as Tan continues to berate her.

He approaches her once more, and Zhou resists, now backing away from him in the direction she came. He appears to stab at her once more.

Zhou points down at the ground as she hunches over, continuing her retreat. Moments later she sits down on the ground while Tan walks over to her and appears to reach out his hand.

Zhou was later seen lying on her back. Three police can be seen in the background, but none of them attended to Zhou.

Violent attacks that involve weapons usually are committed with knives in China as firearms are banned under the Chinese Communist Party’s gun control laws.

In a different incident of assault, a woman used her smartphone to secretly film her husband assaulting her in front of their young son. The woman suffered bruises and the husband was been criminally detained, according to Chinese state-sponsored media The Beijing News.

The assault happened after an argument on May 17 between the woman, surnamed Yao, and the man, surnamed Chen, according to an online police publication. Local police arrested Chen in Guangdong Province, China, on May 18.

The video was published on Weibo, China’s version of Twitter, on May 20 by user “Internet Leopard Strength,” a homonym in Chinese for “internet violence.”

While in police custody, Chen confessed to intentionally harming his wife, according to a police notice published May 21.