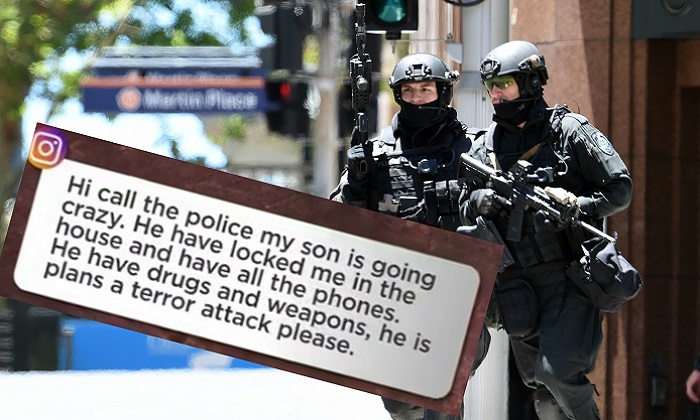 A file image of Australian police during a terrorist situation in 2014 (Saeed Khan/AFP/Getty Images) and the social media call for help that came through to Seven News (Screenshot via 7 News).
World

A teenager has been arrested in the Australian city of Melbourne after pleas for help went out on social media saying that he was planning to conduct a terror attack.

The 17-year-old was arrested by heavily armed police outside a home on the suburb of Cranbourne North in the city’s south east, reported The Age.

The police action was responding to threatening social media posts put out by a person who identified as the adolescent’s mother.

“He have locked me in the house and have all the phones. He have drugs and weapons, he is plans a terror attack please.”

Two messages were sent to the Instagram accounts of the Channel 7 television network around midday Nov. 24. A similar one was sent to Ambulance Victoria. All three included the address details of the teenager.

FIRST ON 7: A man suspected of plotting a terrorist attack has been arrested outside a Cranbourne North house. @PaulDowsley7 #7News pic.twitter.com/7SHdv2nMRA

The television station alerted the police who sent out 40 heavily-armed officers, including the Critical Incident Response Team, to the address.

The police blocked off the road and monitored the house before arresting two males, one of whom was the teenager. He remains in detention.

“He is currently in custody assisting police with their enquiries,” Victoria Police told 7 News.