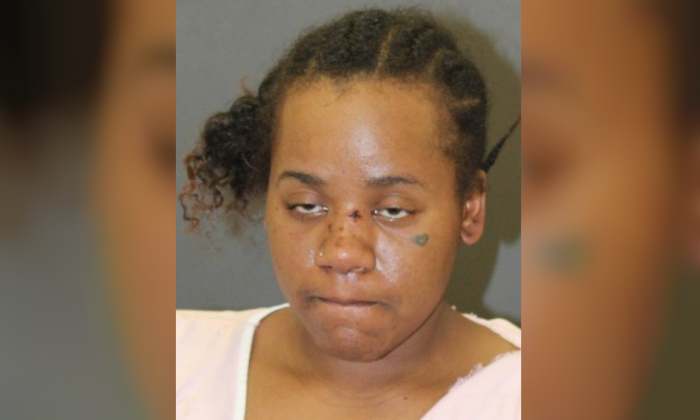 Nichole George, charged in the shooting of an 11-year-old boy and his mother at a Baltimore playground on March 15, 2019. (Baltimore Police via AP)
US News

BALTIMORE—A Baltimore woman has been arrested on charges of attempted first-degree murder after shooting an 11-year-old boy and his mother at a playground.

Baltimore City Police say Nichole George shot a mother and her 11-year-old son Thursday at this Cherry Hill playground. We have reaction from neighbors and police tonight on @wjz. pic.twitter.com/wuXVAvaxmM

Harrison says 31-year-old Nichole George approached the child at a playground and began talking to him before firing a handgun. It’s not known what was said but Harrison says investigators believe there was no contact between them previously.

George was swiftly apprehended by officers in the area. It wasn’t immediately known if she has a lawyer.

3-Year-Old Boy Dies After Being Shot in Car Seat

A 3-year-old boy who was hit by a bullet while riding in his car seat died at the hospital, police said.

The boy was riding in a Dodge Journey being driven by his godmother in Detroit on Jan. 24 when bullets pierced the side of the vehicle and one hit him.

The child “was shot between the shoulder blades,” according to the Michigan State Police.

Paramedics rushed him to Sinai Grace Hospital, where he “was revived,” police added. The godmother was not injured.

State Police Lt. Michael Shaw said late Thursday that the boy was not in good condition.

“I would say that we need to say some prayers tonight,” he told WDIV. “It’s not looking very promising.”

The Michigan State Police said on Friday morning that the boy had died.

Police said the shooting took place when a silver four-door car, believed to be a 2014, 2015, or 2016 Mercedes, pulled alongside the vehicle and shot at it.

“The [godmother] had [the boy] in the backseat behind her when a vehicle pulled up alongside and fired one shot at her,” Shaw said.

HEARTBREAKING: The 3-year-old who died after he was shot on Southfield Freeway last night has been identified as…

Investigators said that the vehicle was seen on surveillance video at a nearby gas station and urged people to contact them with any information about the car or its occupants.

“We are looking for the public’s assistance for information on the homicide of a three-year-old male that occurred on the Southfield Freeway,” the Michigan State Police said.

Along with surveillance video, the police shared a still image of the vehicle. Police described the suspect driver as a light-skinned male with a full beard.

Here is a still photo of the suspect vehicle after the incident. Contact MSP with any information. pic.twitter.com/m50jifVDzk

A relative said that investigators told the family they’re not sure if the shooter or shooters were part of a high-speed chase.

“They were driving down the freeway and I guess it was some guy—they don’t know if they were chasing another car, [a] group of guys, or whatever,” Marilyn Perry, a relative, told Fox 2.

“And they were shooting. So I guess the baby probably cried and when they looked in the back seat, he was shot. I was told the bullet went through his car seat.”

A woman taking her godson to see Sesame Street Live was shot at on the Southfield Fwy. The three year old was killed in his car seat. MSP need your help finding the shooter. https://t.co/P04H99jix9

The boy was identified as Christian Miller by friends family members, who want justice for the slaying.

Another 3-year-old boy was sitting right next to Christian. The group was on its way to see Sesame Street Live.

“My son and godson was in the car and I want somebody to talk,” said Mario Campbell, the father of the other 3-year-old.

Christian’s aunt, Lacresha Hunter, added to WXYZ: “You hurt our family. You hurt everybody.”

The Epoch Times reporter Zachary Stieber contributed to this report.