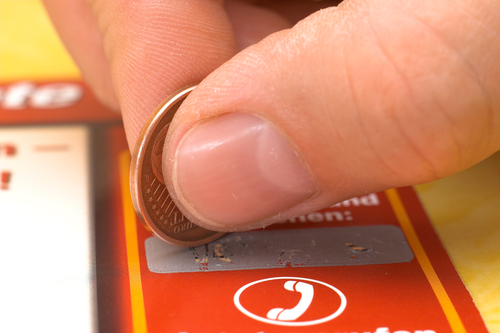 The winner of a scratch-off lottery was arrested for fraud when she went to collect her winnings in Canada.

The unnamed 33-year-old woman had bought a ticket to Canada’s Scratch’M Win with a credit card she had stolen, according to local reports.

When she went to the Atlantic Lottery’s office in Newfoundland to collect her $50,000 prize, before she’d even entered the building, her car was surrounded by officers of the  Royal Newfoundland Constabulary.

But the lottery company says the owner of the card won’t be able to receive the winnings, either.

The suspect, who was taken into custody on Jan. 31 was charged with two counts of possessing a stolen credit card and five counts of fraud, according to CBC.

Atlantic Lottery confirmed that the prize money has not been paid.

“Without commenting further on this specific situation, we do advise that Atlantic Lottery only pays prizes for lawfully acquired tickets,” said spokesperson Natalie Belliveau. “We have a robust process in place with a series of checks and balances to ensure this.”

“If it goes unpaid, the $50,000 will instead go into the corporation’s unclaimed prize account, which goes toward future jackpots.”

“We will continue to monitor the situation,” she added.

A man contacted police on Jan. 30 to report a stolen wallet.

His credit cards had been used to make purchases in several stores in Paradise, Newfoundland, including a lottery ticket.

When they realized the lottery ticket was a winner, the police knew the thief would have to head to the lottery office to collect her winnings.

The card thief’s comeuppance didn’t end with swapping a small fortune for an arrest. According to CBS, her car was also impounded when officers found the companion who had driven her to claim her winnings was driving without insurance.

The case caused great interest on social media, where most people felt natural justice dictated the winnings should go to the person whose card she stole.

One typical post said, “No brainer, should go to the gentleman who’s credit was used to purchase it. Hopefully the Lottery Corp will do right by him.”

“I’m not sure why people think the man should Be given the money,” wrote one person. “The nature of lotteries is chance. He didn’t buy the ticket. His card was used illegally to purchase the ticket. Since there are policies in place to address such a situation the point is moot. The person responsible will have their day in court and be held accountable. That’s it.”

Perhaps the card owner had a lucky escape: Not everyone who wins thinks that winning the money from a lottery is such good luck.

Rogers, who had been in foster care at Cumbria, splashed money on luxury presents for her family members and friends and spent thousands of dollars on big party nights. She paid for cosmetic surgery, designer clothes, and $298,510 on cocaine.

Just six years later, she said none of it made her happy, and even “ruined” her life. Rogers tried to commit suicide after discovering her boyfriend cheated on her. She became a mother and had to move back with her own mother, doing three cleaning jobs to make ends meet. “My life is a shambles,” she said in 2009.

A decade after winning the lotto, Rogers found happiness once her fortune was gone.

“It was too much money for someone so young. Even if you say your life won’t change, it does and often not for the better,” she told The Sun. “The pressure to splash out and live a glam party life has gone–and I prefer it,” she said.