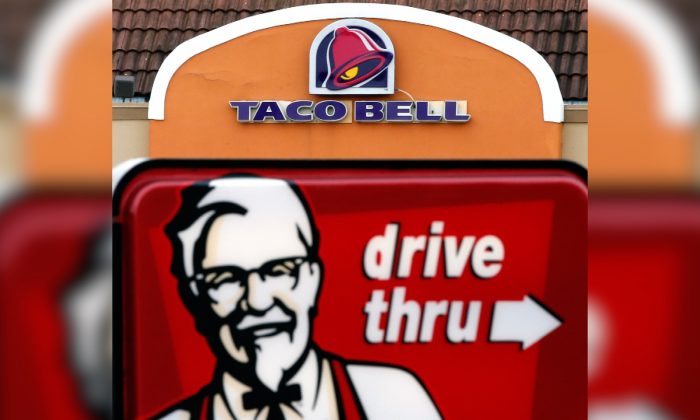 An Oregon woman has been arrested after she allegedly poured alcohol into a Taco Bell employee’s mouth while in the drive-thru over the weekend, according to reports.

Elianna Aguilar-Aguilar, 23, was charged with driving under the “influence of intoxicants” (DUII) after she poured Hennessy cognac down the employee’s throat through an open drive-thru window, in front of a police officer, who happened to be in a vehicle behind her.

The Washington County Sheriff’s Office shared an image of the 23-year-old on its Facebook page on July 22, with the caption, “weirdest DUII arrest of the weekend.”

“Elianna Aguilar-Aguilar, 23, of Cornelius, rolls through a Taco Bell drive-thru RIGHT IN FRONT OF A SHERIFF’F [sic] OFFICE SERGEANT,” the sheriff’s office wrote.

Washington County Sheriff’s Office officials added that Aguilar-Aguilar was still in her car when she reached through the open drive-thru window and poured the drink into the employee’s mouth at around 1:20 a.m. on July 20.

She was pulled over along 185th, and had two passengers in her vehicle, according to a spokesman for the sheriff’s office, Deputy Brian van Kleef.

The 23-year-old told a police officer she was smoking marijuana and drinking alcohol while driving, reported television station KOIN. She added that she didn’t know who the Taco Bell employee was.

“We talked to the employee after, and he said most of it was spilled on him and that he actually didn’t consume the Hennessy,” van Kleef told Oregon Live.

Deputies reportedly found that Aguilar-Aguilar had a blood alcohol level of .12 percent, and was booked into jail on an alcohol related DUII charge. Oregon’s legal limit is .08 percent.

In a separate incident on June 28, a Walmart in Texas asked one of its employees to stand guard to protect its Blue Bell ice cream, after a woman was spotted grabbing a tub and licking it before putting it back in the freezer.

Footage of the incident, which went viral earlier this month, showed young woman who was filmed licking the top of the Blue Bell ice cream tub, then laughing before she put it back on the shelf.

The Walmart in Corpus Christi announced the surprising news in a Facebook post, saying that the store has asked an “armed” guard named Ruben to watch over the ice cream, according to ABC 13.

“We’re guarding our Blue Bell ice cream for your weekend party,” the store said in the social media post, which later appeared to be removed.

Ruben is apparently a member of the store’s staff, and he was only holding a water gun.

The young woman has been identified since the incident.

Lufkin, Texas police said on July 5 they believed the suspect has been identified, after “detectives had obtained surveillance video placing a woman matching the suspect description in the Lufkin [Walmart] on June 28 around 11 p.m,” reported NBC News.

Police said the suspect, who is under 17, admitted to licking the ice cream in the Lufkin store. However, because she’s a minor, she will not be identified.

The police department had said in a statement on July 3 that the offender could face a second-degree felony charge of tampering with a consumer product. This meant facing fines of up to $10,000 and a prison term of two to 20 years, according to the Texas state penal code.

Police, who continued the investigation throughout the Fourth of July holiday, also identified the individual who recorded the now-viral footage, who can be heard chanting, “lick it, lick it,” in the background, before adding, “Oh, you foul. Put it back, put it back.”

“We have spoken with her boyfriend, who is an adult, as well. They were both forthcoming with what occurred and admitted to the act,” the police said in an update.

“We do not intend to pursue charges against her as an “adult” and therefore what happens from here is at the discretion of the juvenile justice system,” continued the police statement. “As to whether her boyfriend will face charges, we are currently discussing his involvement with prosecutors.”