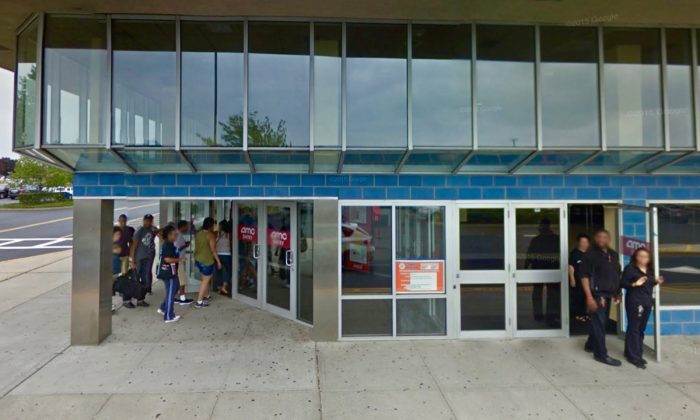 The AMC Dine-In movie theater, in Levittown, New York, where a woman allegedly dumped popcorn on a 2-year-old. (Screenshot via Google Maps)
Crime and Incidents

A 25-year-old woman in Long Island, New York, dumped a bucket of popcorn on the head of a 2-year-old who was in the movie theatre because she was too noisy.

Keri Karman and her father, 61-year-old Charles Karman, were watching a movie at the Levittown AMC Dine-In Theater on Long Island. They took seats next to the small child and her mother, the Daily News reported.

After the child asked her mother for popcorn, Keri Karman lost her temper. After telling the child to keep quiet, the child’s mother told Karman not to speak to her child. Karman then erupted with profanity and screaming, while also putting her hand over the child’s mouth, according to the Daily News.

Then, Karman dumped a tub of popcorn on the child’s head, and hit her with the empty container. After the child started crying, Karman and her father fled, the Daily News reported.

The child was medically treated for a bruise and head pain, and police were notified.

“Somebody has anger-management issues,” said a former neighbor of the Karmans, via the Daily News. “That’s a bad example to set.”

Detectives tracked down the pair by using surveillance footage from the theater along with credit card receipts. They were arrested the afternoon of March 2, after a two-month investigation. The father was arrested because he did not try and stop his daughter’s violent actions, according to the Daily News. They are both charged with endangering the welfare of a child, ABC 7 reported.

“Too bad you didn’t hear the real story!! When asked to quiet the kid, the mother pushed Keri and the popcorn went flying,” Abby Levitt Ferrara, a friend of Karman, wrote on Facebook, according to the New York Post. “Keri never raised a hand in any way … there is not an aggressive bone in Keri’s body.”

A theater employee remembered seeing the child crying in the lobby.

“I guess she had been calming (the girl) down since they walked from the theater,” the employee said, via the Daily News. “It’s just stupid, to be honest … Don’t do that. You’re a grown-up.”