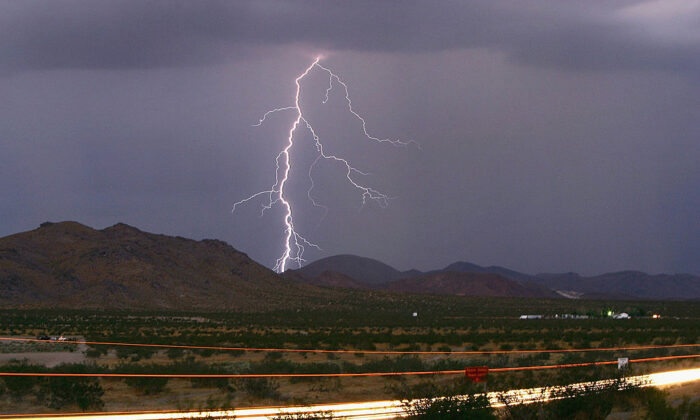 LOS ANGELES—A woman and her two dogs were fatally struck by lightning in Pico Rivera on June 22 as a storm front pushed across the Southland and led to power outages and beach closures.

The lightning strike in Pico Rivera occurred around 8:50 a.m. when the woman was walking along the San Gabriel River, according to the Los Angeles County Sheriff’s Department. The woman and her dogs both died at the scene.

“There’s a one-in-a-million chance of something like this happening, and it happened,” Los Angeles County sheriff’s Sgt. Patrick Morey told the Los Angeles Times.

According to the county fire department, the woman was struck near Mines and Rimbank avenues.

It was a tragic turn in the morning peppered by scattered thunderstorms that made for a damp commute in some areas, sparked at least one small brush fire, and caused lightning strikes that forced temporary closures of Orange County beaches in Newport Beach and Laguna Beach. All beaches in Long Beach were closed late Wednesday morning due to a “significant lightning strike within the breakwall,” according to the city Fire Department.

The Pasadena Fire Department reported several “lightning-related palm tree fires” Wednesday morning, and by mid-morning was responding to a blaze above Eaton Canyon.

“Please try to stay indoors during this unstable weather and have your disaster supplies ready if you lose power,” the fire department warned residents.

Pico Rivera city officials, responding to the death of the woman and two dogs, said all city crews were instructed to work indoors for the remainder of the day.

“Additionally, the city is sending out a notification to residents to provide them with a warning to be careful,” according to a statement from the city. “Today’s incident is a strong reminder that people and organizations must exercise extreme caution and stay indoors as much as possible during a thunderstorm. While lightning strikes are rare in Southern California, they occurred frequently overnight with over 3,700 lightning strikes recorded in the region.”

There were scattered reports of power outages around the Southland Wednesday morning as isolated storms erupted. At least one small brush fire in the Sunland area was believed to have been sparked by a lightning strike.

A strong storm cell developed early Wednesday morning over the Pasadena area, prompting the National Weather Service (NWS) to warn of potentially gusty winds, lightning, and even hail in parts of the San Gabriel Valley.

By daybreak, forecasters said the eastern portion of the county had been “overrun with showers and (thunderstorms).” Most areas that received showers saw relatively low rainfall totals, generally less than a quarter-inch, but forecasters warned of potentially higher amounts in select areas. One area in the San Gabriel Mountains had received just under an inch as of mid-morning.

According to the NWS, the main storm front over Los Angeles County stretched from Long Beach through the Antelope Valley, with isolated storm cells developing and dissipating along the front, dropping roughly a quarter-inch of rain at a time and even some small hail. One area in the San Gabriel Mountains received just under an inch of rain.

“There have been numerous lightning strikes,” according to the NWS. “This pattern will largely stay in place until evening, as the upper low slowly moves to the northeast.”

A chance of showers and thunderstorms will continue Wednesday evening as the storm system moves off to the northeast. Calmer weather conditions are anticipated Thursday, with mostly sunny skies but a small chance of some isolated showers thanks to lingering moisture.