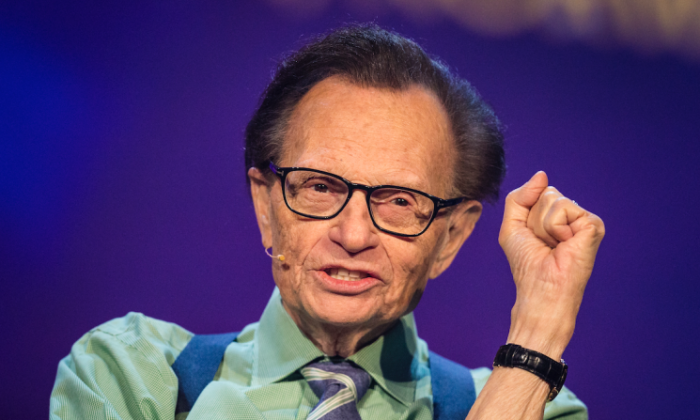 Larry King participates on a discussion on fake news in the media during the Starmus Festival in Trondheim, Norway, on June 21, 2017. (Michael Campanella/Getty Images)
Entertainment News

Terry Richard, the former wife of singer Eddie Fisher, alleges that the two incidents occurred in 2005 and 2006 at an awards dinner at Universal Studios in Los Angeles.

At the first event, Richard, 63, said that King slid his hand down her dress while the pair posed for a photo. Daily Mail obtained a photo that was taken at that event and published in a local newspaper.

EXCLUSIVE: 'His fingers went into the crack of my a**!' Ex-wife of crooner Eddie Fisher claims Larry King groped her twice https://t.co/w7PXTLc12u

At the second event, King—he was 73 at the time—groped her so hard that he left a large bruise.

“Larry King is a groper,” Richard told Daily Mail. “He groped me twice. He gets a thrill doing this in front of the camera, knowing I couldn’t do anything.”

King’s lawyer responded to the accusations by saying that they are false.

“Mr. King did no such thing then or ever,” the lawyer said.

Richard said that she first encountered King in 2004 when she and her son took a photo with King. He asked her when she’ll be coming on his show, but she said it would have to wait until her book is released.

“The first time Larry groped me was early in 2005,” Richard said. “I was working as a correspondent for my local Los Angeles newspaper the Tolucan Times and I was covering a baseball awards dinner at Universal Studios.”

Richard was a correspondent for a local newspaper at the time and was covering a baseball awards dinner. After taking photos with several prominent baseball figures, Richard spotted King talking to the former owner of Los Angeles Dodgers and went up to him to ask for a photo.

This is when King stuck his hand inside Richard’s backless dress.

“I couldn’t believe it. I was so shocked. I froze. I let out a ‘squelch,'” Richard said. “Jamie McCourt was standing to the left of us but didn’t see anything, she looked at me after she heard my “squelch” but didn’t say anything. I just smiled there real big, I didn’t know what to do.”

“He had a big smile on his face,” Richard said. “I didn’t say anything, I didn’t want to cause a scene in front of everyone.”

“My reaction was to slap him in his face but he was the guest speaker. It was awful,” Richard said. “What really got me was—I’m a wife, my child was at the event, I’m working and I was over 50. So, there’s no age limit.”

The next year, Richard spotted King at the same event and tried to avoid him the whole night. At the end of the night, however, King ended up right in front of her.

“I thought, surely, he’s not going to do anything this time, and the old dog did,” Richard said. “When he grabbed me I let out an audible sound, and Larry scurried off. He ran off with his wife down the red carpet towards the limousines. And I just stood there shocked, thinking this must be a thing for Larry.”

The bruise King left on Richard’s backside was large and did not go away for a week.

“I mean, am I the only one he’s ever done this to?” Richard asked. “I don’t think so. It’s obvious Larry King has been getting away with this for a long time.”

Richard said that 12 years on, she is still haunted by what he did, wondering if the next stranger she poses for a photo with her is going to grope her.

“I haven’t seen Larry since the last time he groped me, but if I had the chance to talk to him I would tell him, shame on you!” Richard said. “It was inappropriate.”

Richard said that she does not want King’s money but demanded an apology.

“How would he feel if someone did that to his wife or his daughter?” Richard said. “Larry has two young sons that I hope wouldn’t do what he did.”

Richard said that King probably forgot about what he did. She decided to come forward because so many women have done the same in a recent torrent of sexual misconduct allegations directed at entertainment’s elite.