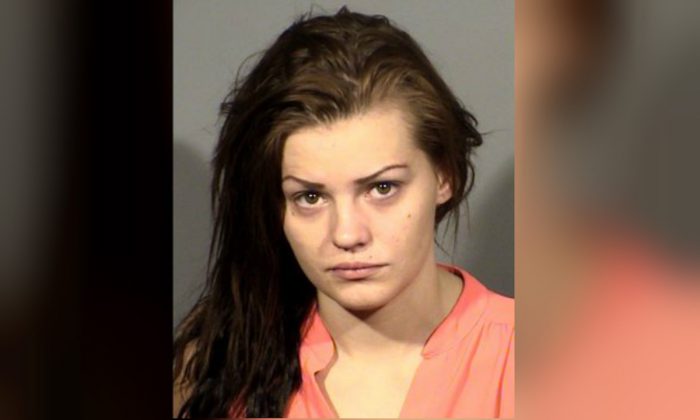 Krystal Whipple, 21, identified as the suspect in a hit-and-run death outside a salon in Las Vegas on Dec. 31, 2018. (LVMPD)
Crime and Incidents

The woman suspected of running down and killing a salon owner over an unpaid $35 manicure bill has been indicted by a grand jury, charged with murder.

Twenty-one-year-old Krystal Whipple now faces charges of open murder, robbery, and burglary with a deadly weapon according to The Associated Press.

Authorities say that Whipple drove a car over a salon owner in Las Vegas, leaving her for dead in a hit-and-run in December.

Whipple was arrested (pdf) in January following a week-long manhunt after authorities released her photograph, along with video footage of the incident in the parking lot of the Las Vegas salon.

According to local reports, she was indicted by a grand jury with the four charges on June 28, 2019.

Whipple’s lawyer has not responded to a request for seeking comment on the indictment, according to AP.

Salon owner Nhu Nguyen, 53, was killed on the afternoon of Dec. 29, when she was pulled under the wheels of a Chevrolet Camaro as she and her husband tried to stop it from leaving the parking lot outside the salon where they worked.

The video shows Nguyen, who is a mother of three, run in front of the car, as she realized the customer was leaving without paying. Her husband runs out after her, chasing the car.

Lieutenant Ray Spencer, Las Vegas homicide, said at the time, “Our investigation determined that a woman went into Crystal Nails to get a manicure, and then attempted to pay with a fraudulent credit card.”

“When the credit card payment didn’t go through, the woman said she would get cash from her car,” Spencer said in a statement.

“The salon owners noticed that the customer was starting to drive away, and ran out to stop her. The female owner jumped in front of the suspect’s vehicle while her husband was at the back of the car—at which time the customer accelerated through the parking lot.”

Nguyen was thrown under the vehicle and later died at Universal Medical center, according to Spencer.

Her husband, Sonny Chung, said he tried to grab the car’s rear window, reported the Las Vegas Review-Journal, but the customer kept driving.

“My wife ran out and tried to stop her, and then she rolled forward,” Chung told the paper at the time. “She kept pushing the gas, and my wife fell off, and she kept pushing more, and she dragged her from here to over there [roughly 50 feet away].”

According to police, the car was a rental which had been stolen by Whipple, which was later found abandoned at an apartment complex.

Whipple was previously convicted for attempted possession of a stolen vehicle, according to AP.

The “open murder” charge that Whipple faces is a category available in some states which allows the jury to decide between a first- or second-degree murder conviction.

Christy Le, the youngest daughter of Nguyen, started a campaign on GoFundMe a day after her mother’s death. Le describes her mother as hardworking and selfless.

“She had been constantly putting in 12-14 hrs a day, 7 days a week to send her daughters to college and to support her mother, siblings, and grandchildren.”

The campaign reached a total of $36,500 within about two weeks.

Le stated the funds would be used to pay for funeral expenses and any debts she may owe. She said any money left over will be placed in her savings account and go toward her college tuition.