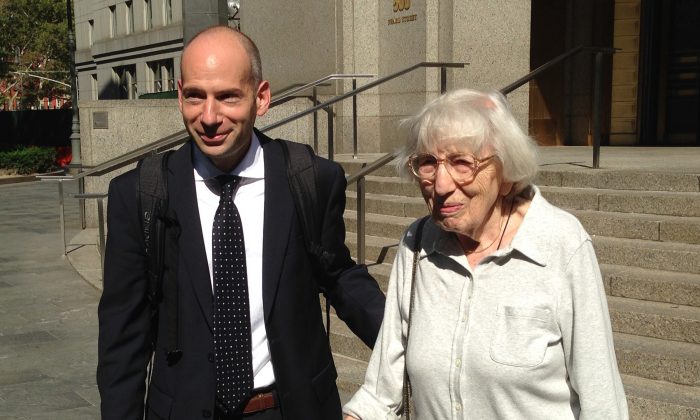 Miriam Moskowitz leaves federal court with her lawyer Guy Eddon in Manhattan, N.Y., on Aug. 25, 2014. Moskowitz lost her bid to persuade a judge to erase her 1950 conviction for conspiracy to obstruct justice in the run-up to the atomic spying trial of Julius and Ethel Rosenberg. (AP Photo/Lawrence Neumeister)
New York

NEW YORK—A 98-year-old woman lost her bid Thursday to persuade a judge to erase her 1950 conviction for conspiracy to obstruct justice in the run-up to the atomic spying trial of Julius and Ethel Rosenberg.

Miriam Moskowitz sought this year to get a judge to reconsider her conviction in light of new evidence that emerged in the last decade. Moskowitz, who lives in Washington Township in Bergen County, New Jersey, was sentenced to two years in prison after her conspiracy conviction.

After hearing oral arguments Thursday, U.S. District Judge Alvin Hellerstein ruled that Moskowitz’s lawyers could not show that the newly released records would have changed her trial’s result.

After hearing the judge’s ruling, Moskowitz said: “Too bad.” She said she was disappointed.

The government had opposed Moskowitz’s request, saying the evidence supported her conviction and that she conspired with two men to lie to a grand jury investigating allegations of atomic espionage.

“Her claims, even if taken at face value, are insufficient to establish an error under today’s law, let alone the law when she was convicted in 1950,” prosecutors said in court papers.

Moskowitz’s lawyers said FBI and grand jury statements by the key government witness against her were withheld from the defense.

The Rosenbergs were convicted of passing nuclear weapons secrets to the Soviet Union and were executed in 1953. Since then, decoded Soviet cables have appeared to confirm that Julius Rosenberg was a spy, but doubts have remained about Ethel Rosenberg’s involvement.