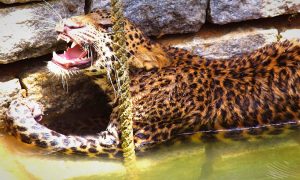 Video: Welcome to the pack! Friendly wolves come out of woods to play with human

It is a shocking video to viewers around the world. In this short three minute video, watch as wolves approach a man to play in a highly unusual sighting for such an unsocial animal.

In the video, a pack of wolves seemingly comes out of nowhere and begins to slowly approach the man and crowd standing outdoors at the Kolmarden Wildlife Park in Sweden. It seems like it should be a tense and nerve-wracking moment, as though an attack by the wolves were imminent, leaving viewers on edge.

But instead, the wolves begin to play with the man and display friendly behaviors towards him by jumping on him, licking him, and being playful in a sight you do not see every day. Onlookers cannot believe the sight of these wolves playfully engaging with the man, who they appear to take a fondness too.

Despite how friendly they appear the moment is shocking and will leave your heart racing as you watch the video for yourself. Do not miss your chance to witness this incredible interaction between man and wolves on video at Kolmarden Wildlife Park in Sweden. With the behavior so rare, will not find such an interaction elsewhere.