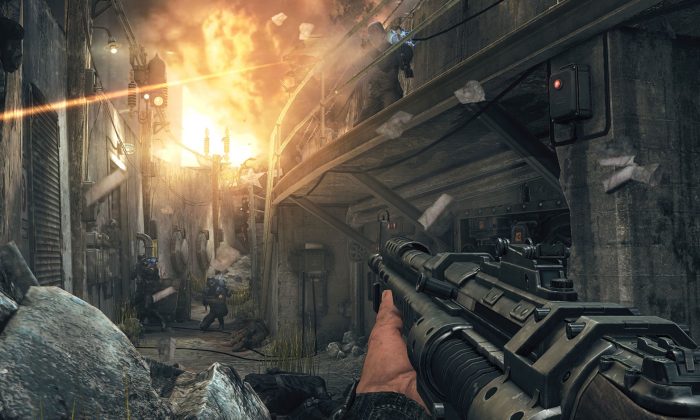 “Wolfenstein: The New Order,” the latest shooter from the long-running franchise, will be released May 20 and it apparently has a massive patch for day one.

PlayStation Lifestyle reported that the day one patch is 5GB while the Xbox One’s patch is 7.3GB.

According to the website, the patch entails “text, bug, gameplay, checkpoint & audio fixes.” The patch, however, is not mandatory.

Last week, the launch trailer for the upcoming was released.

“The New Order” is set in an alternate universe in the 1960s where the Nazis won World War II with mysterious technology. William “B.J.” Blazkowicz, the original character in “Wolfenstein 3D,” will return for the game.

Preordering the game will grant access to the “Doom” beta.

The synopsis for the game reads: “Europe, 1946. World War II rages across Europe. Where once the Allies pressed advantage, the Nazi forces have turned the tide in dramatic fashion behind the technologically advanced war machine of General Wilhelm Strasse — Deathshead. When a final Allied assault on Deathshead’s compound fails, the Allies’ greatest hope falls with it. Europe, 1960. The war is over. And the Nazis are triumphant victors. Using unrelenting force and brutal intimidation, the Nazis have brought even the most powerful nations to their knees. The Nazi regime now rules the globe with an iron fist.

“You are Captain B.J. Blazkowicz, the American War Hero. After emerging into this world of darkness, you must launch an impossible counter-offensive against the monstrous Nazi regime. Only you dare stand up against an unstoppable army of Nazi robots and hulking Super Soldiers. Only you can stop Deathshead. Only you can rewrite history.”