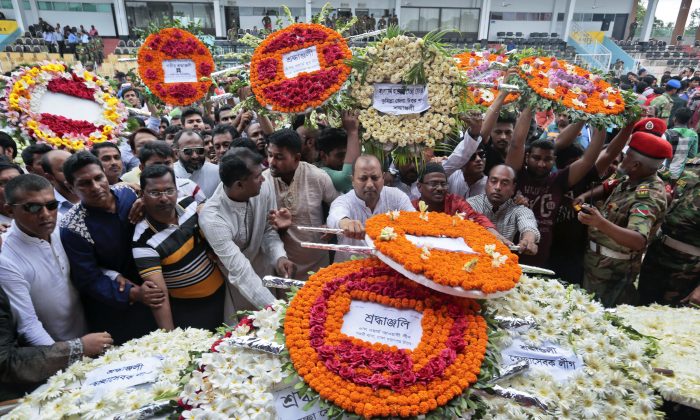 Local residents pay their respects to the victims of the attack at the Holey Artisan Bakery in Dhaka, Bangladesh, on July 4, 2016. The assault on the restaurant in Dhaka's diplomatic zone by militants who took dozens of people hostage marks an escalation in militant violence in the Muslim-majority nation. (AP Photo)
Opinion

Wolf-Pack Terrorism: Inspired by ISIS, Made in Bangladesh

NEW DELHI—For three years Bangladesh had witnessed sporadic killing of minorities, free-thinking bloggers, and members of LGBT community amid signs of a growing ISIS presence. With the brutal murder of 22 diners, workers, and police at the upscale Holey Artisan Bakery, Dhaka now joins Paris, Brussels, Orlando, and Istanbul on the global map for terrorism.

Distinguishing the Dhaka suspects from others is that they belong to the country’s western-educated elite including a senior member of the ruling party. The homegrown bunch made sure their crime got international airing, using the restaurant’s Wi-Fi to post ghastly images on the Islamic State website. As Bruce Riedel, a leading expert on terrorism, has noted, Bangladeshi terrorists have graduated from lone-wolf to wolf-pack attacks in extending the ISIS ideological footprint into South Asia.

Bangladeshi terrorists have graduated from lone-wolf to wolf-pack attacks in extending the ISIS ideological footprint into South Asia.

The massacre carried out by a group of suicidal young men who had every reason to live not only raises questions about the appeal of extremist ideology on an unlikely cohort—it also exposes the hollowness of Bangladesh’s vaunted fight against terrorism, protecting the perpetrators while targeting political opponents. Sheikh Hasina government’s dismal failure in containing the spread of radical poison threatens to destabilize the country and the fragile region.

Since Sheikh Hasina won the 2014 elections that were boycotted by the opposition and since the formation of Islamic State (ISIS) and al-Qaeda in the Indian Subcontinent (AQIS), Bangladesh has witnessed the killings of 18 persons in daylight attacks, ISIS–al-Qaeda style.

The Bangladeshi authorities insisted that Jamaat-ul-Mujahideen Bangladesh (JMB), an organization formed in 1998, was behind the restaurant attack, and there is no denying that the militants were linked to JMB, but in the November issue of Dabiq, the Islamic State’s magazine, the group’s chief in Bangladesh, Abu Ibrahim al-Hanif, had praised JMB for its intent and capacity to resist “the effect of both European colonization and Hindu cultural invasion.”

Extremist groups in Bangladesh work in a fluid environment. Cross-fertilization is the norm of the day.

Extremist organizations in Bangladesh work in a fluid environment where cross-fertilization is the norm of the day.  Jamaat-e-Islami of Bangladesh has direct contact with Afghan Taliban, Gulbuddin Hekmatyar’s Hizb-e-Islami and Tehrik-e-Taliban Pakistan. Hizb-ut-Tahrir is banned, but operates in the country. There is undeniable sprinkling of Islamic State militants and Ansarullah Bangla Team, an al-Qaeda affiliate, in Bangladesh.

For its own reasons, Bangladesh has chosen to turn a blind eye to foreign inspirations. Last year when one Italian aid worker and a Japanese farmer were killed, ISIS was quick to claim responsibility. But a police investigation alleged that opposition leader Khalida Zia’s Bangladesh National Party orchestrated such attacks.

Independent secular bloggers, four in total, have been killed in similar fashion. The profile of other victims—comprised of non-Sunni Bangladeshi Muslims, Hindus, Christians, visiting foreigners, and atheists—confused local authorities. All the attacks were owned either by Islamic State or al-Qaeda, but the government refused to accept the presence of offshore militant organizations in the country, perhaps to reassure foreign investors.

A nonchalant home minister, Asaduzzaman Khan, reiterated, “There’s no organizational existence of ISIS.” The prime minister preempted police by alleging the attacks were the handiwork of opposition parties.

The inception of the International Crimes Tribunal by Sheikh Hasina’s Awami League government in 2010 was used as a forum to settle political and personal scores on the nation’s founding tragedy—war crimes committed during the liberation war against Pakistan.

Ongoing conflict between the two major political parties, the Bangladesh National Party, which considers itself custodian of Bangladeshi nationalism, and the Awami League, which regards itself as the sole guiding force of Bangladeshi liberation, has left the field open to ISIS and al-Qaeda to recruit militants.

As ISIS emerged in 2014, thousands of extremists from across the globe headed to Syria and Iraq. Authorities across the world, including those in Bangladesh, conveniently ignored the outflow of homegrown militants.

Bangladeshi intelligence had alerted its government long ago that hundreds of their residents had traveled to Syria and Iraq to participate in the Islamic State’s jihad to establish an Islamic Caliphate.

High-ranking Bangladeshi intelligence officials noted that about 25 Bangladeshi militants have returned to the country from the Syrian and Iraqi theaters of war, and the same is true for India where security agencies have arrested three Indians who had participated in jihad in Syria.

Indian cybersecurity experts have profiled ISIS propaganda in South Asia and tracked returnees from Syria and Iraq while also following the spread of ISIS ideology through the internet.

What the Islamic State lost in terms of territory in Syria and Iraq, it has regained in terms of influence.

The reverse flow of ISIS ideology, if not fighters, was quick in Europe and the United States in cities like Paris, Brussels, Istanbul, and Orlando. In these cases, although de-radicalization methods were adopted by security agencies, local authorities tried to downplay the ISIS presence, fearing such admissions might be construed as a failure on the part of the incumbent government.

Since 2014, social media has indicated growing cooperation between ISIS and Bangladeshi extremist groups like Ansar-ul-Bangla Team, Jamaat-e-Islami Bangladesh, Jamaat-ul-Mujahideen Bangladesh, and al-Qaeda in the Indian Subcontinent (AQIS). A confabulated Dhaka Police discounted the possibility of the Islamic State’s presence in Bangladesh. In June, complicating the topography of extremism, Bangladesh police arrested 5,000 suspected militants from various groups, including ISIS.

Indian Prime Minister Narendra Modi is helping Sheikh Hasina on many fronts. Both leaders get along well on many issues including containment of Islamic extremism. Although Modi and his ministers repeatedly disclaim the infiltration of ISIS in India, security agencies, especially cybersecurity wings, are known to constantly feed the government with real-time information about ISIS activities in India and neighboring countries.

It’s no secret that Indian radicals run a Twitter handle and other propaganda mechanisms for ISIS from Indian cities. One such recruiter is in Indian custody. Fearing the growing impact of ISIS, Modi himself initiated a session on de-radicalization at the annual meeting of state police chiefs at Rann of Katch in Gujarat.

Nevertheless a lack of coordination among state and federal security agencies, as well as the inefficiency of state police and political rivalries, is taking a toll on India’s anti-terror policy. Reelection of Mamata Banerjee in West Bengal, accused of being soft on Islamic terrorism and Bangladeshi migrants, is a setback for Modi.

India is like a landmine field, with extreme poverty, inequality in education and other opportunities, and a Muslim minority feeling marginalized. With the retreat of ISIS from Syria and Iraq, it’s more than likely that the ideology will soon reach Indian cities with a Dhaka-like attack waiting to unfold.

Closer scrutiny of the perpetrators’ profiles in Friday’s attack suggests that some children of the country’s elite are disillusioned with Bangladeshi politics and inspired by the Islamic State’s vision of an Islamic caliphate. Some have been silently radicalized by militant Islamists. Bangladeshi youth are exposed to real and imaginary pains of the Muslim world, and ISIS ideology carries appeal.

Street struggles between the country’s leading political parties, hampering development of Bangladesh, has left educated, employable but impressionable youths disenchanted with the ability of political leaders to resolve problems. Prolonged political fights alienate the country’s elite, a sure way for the government to lose the country to the brutal ideologies of ISIS and its affiliates.

Saroj Kumar Rath, Ph.D., is assistant professor at the University of Delhi and an expert on security affairs in South Asia. Copyright © 2016 YaleGlobal and the MacMillan Center. This article was originally published on YaleGlobal Online.