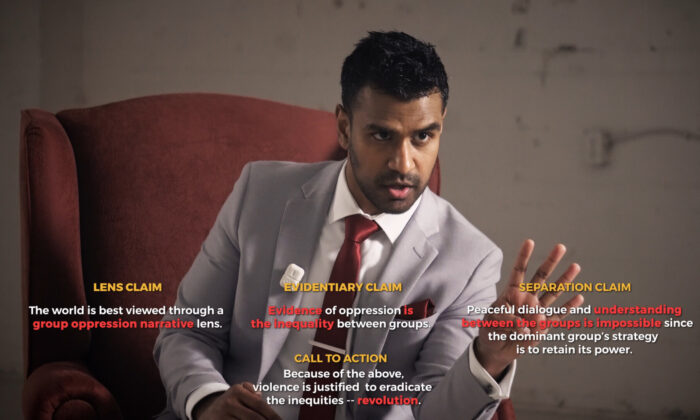 Some of the core tenets of the “woke” ideology spreading around the country mimic ideas used to justify many of the most horrendous atrocities of the past century, according to several experts.

A recently released documentary exploring the topic, called “Better Left Unsaid,” concludes that the self-identified “radical left” endorses four fundamental “truths” that they “hold to be self-evident,” noting that these tenets have also been used to justify and incite many of the worst massacres of the 20th century.

The first of the four claims is that “the world is best viewed through a group oppression narrative lens.”

The “woke” ideology is based on a set of quasi-Marxist theories that divide society into “oppressors” and the “oppressed” based on characteristics such as race, sex, class, or sexual proclivities. “Woke” is sometimes used interchangeably with Critical Race Theory (CRT), which is one of the more prominent ideologies that operate within this framework.

The third claim is that “peaceful dialog and understanding between the groups is impossible since the dominant group’s strategy is to retain its power.”

Woke theorists have posited that the “oppressed” have a uniquely valuable perspective on reality unavailable to the “oppressors.” Meanwhile, they say, “whiteness” or “white heteropatriarchy” can’t help but to try to maintain its “hegemony.” Even if it does things that benefit members of other groups, such as by abolishing slavery or giving women and blacks the right to vote, it’s still done out of self-interest and in order to further entrench its institutions and norms and thus ensure the “privilege” of its members.

Proponents of the ideology engage in dialogue between themselves, but with everybody else the communication is supposed to generally flow in one direction—that of acceptance of their views. Any challenge to the ideology is labeled as self-serving or even as an assault on the “oppressed.”

Finally, the ideology at least implicitly acknowledges that “because of the above, violence is justified to eradicate the inequities,” the documentary says.

“From my experience, they (to the degree they can be grouped together enough to call them ‘they’) tend to advocate for violence against those oppressing and equate it to laudatory behavior; hence, ‘punch a Nazi,’” author of the documentary, Curt Jaimungal, told The Epoch Times via email.

“I have catalogs of tweets, written statements, and videos of people ranging from students to [professors] explicitly calling for violence and downplaying the violence of those on the left when compared to the right,” he added, not because of intensity or frequency of such violence, but because of the so-called “nobleness of the extreme left’s position.”

These four tenets, Jaimungal demonstrated in the documentary, are common to many of the most brutal massacres and regimes of the 20th century, from the Soviet Union and Nazi Germany to communist China and the Rwandan genocide.

In each case, an entire class of society is painted as unfairly privileged and as such inherently oppressive, with little regard to specific actions of the individual members of the group. Meanwhile, disagreement with or mere disinterest in this classification is taken as support for the perceived oppression. With reconciliation through dialog taken off the table, the only remaining recourse is conflict—a “revolutionary” action where violence is seen as inevitable and, ultimately, preferable.

“Too few people know about the ceaseless carnage that took place under the masthead of the isomers of equity,” Jaimungal narrates in the documentary.

He said he avoided using examples of atrocities committed as a consequence of the totalitarian nature of the various regimes.

“I am careful to only list or only talk about the deaths associated with the philosophical doctrine of group guilt and class guilt,” he said.

Proponents of socialism commonly argue that the movements that led to these tragedies were commandeered or hijacked by people that didn’t really believe in the ideology. But they have tended to level the argument retrospectively, after they or their like-minded predecessors initially endorsed the movements and nascent regimes, the documentary points out. Also, proponents usually stop short of detailing how the next attempt will prevent any supposed nonbelievers from taking over.

The comparison between the preludes to past massacres and the current manifestations of the woke ideology is a fair one, as long as it’s not taken as an absolute, according to Erec Smith, associate professor of Rhetoric and Composition at York College of Pennsylvania.

“We’re not saying [a massacre] is definitely going to happen, but we need to be cognizant and remember our history and be careful about what’s going on here,” he told The Epoch Times.

Jaimungal’s conclusions were also recently endorsed by several scholars of totalitarianism, all of whom are critical of woke ideology. They were invited to comment on the film by Pat Kambhampati, chemistry professor and head of the Society for Academic Freedom and Scholarship at McGill University in Canada.

“The same ideas that gave rise to Curt’s movie and the discussion of communism, we see a lot of parallels and isomorphisms taking place in the West and within academia,” he said during a May 31 panel discussion on topics raised by the documentary.

Janice Fiamengo, retired English professor at the University of Ottawa and self-declared anti-feminist, backed Jaimungal’s argument during the panel discussion. She was also featured in the film.

“As soon as one establishes these oppressor groups and oppressed groups, then when you are speaking supposedly on behalf of the oppressed, you can do nearly anything,” she said.

Gad Saad, evolutionary psychology professor at Concordia University, put forth the point during the panel that people professing utopian goals have a tendency toward eliminating those who oppose them.

Postmodernism introduced the idea of fundamental relativism, professing that there is no objective truth, but instead the powers that be establish as true whatever is in their interest.

While the documentary notes that this notion is itself a “truth claim” and thus undermines its own validity, Rectenwald pointed out that adoption of the notion has serious real-life implications.

“The problem with this is not simply that we have no criteria for truth claims with this kind of notion, but rather it leaves open the possibility that when it has the requisite power behind it then anything can be asserted and can be asserted with force,” he said.

He gave the example of the ideology behind the transgender movement sweeping through government institutions.

“The force of the state is behind it and they can say that if you don’t accept that your child is a boy or a girl when they are the other then you could go to jail for this … or you could lose custody of your child,” he said.

“So when my truth becomes as good or better than any objective truth then we get to this point where the requisite power is applied and therefore we get the kind of authoritarianism and totalitarianism that we saw in the Soviet Union where people were forced to maintain things they knew to be false.”

Jaimungal defended in his film not only physical truths, but argued that just as there are “preserved genes” in human DNA that stand virtually unchanged through time and would be catastrophic to meddle with, there are also “preserved memes”—ideas that stand true throughout history and are similarly crucial to maintain, timeless lessons one can find in many religious scriptures and ancient stories.

These ideas are ingrained in humans, but have also been “externalized,” meaning imprinted on the external world in the form of the written word, art, rituals, and so on, he says in the film.

“Our survival depends on these ‘externalized memes.’”

Clinical psychologist and professor Jordan Peterson touched upon this topic during the panel discussion, noting the damage to the Western mythos inflicted by certain scientific theories, particularly Darwinism, and the subsequent substitution of the religious underpinnings of Western culture by an ideological ersatz.

“I could say to the atheists among the group, you know, ‘You’re not too fond of religion. How are you feeling about its replacement?'” he said.

In an “intact culture” a person is “inculturated” by the age of about 18 into “a religious belief that saturates the entire culture,” he said.

“It’s granted to you, it gives you an identity, and that’s what your identity is.”

Western culture has become in this sense fragmented, he argued, as it now lacks such a comprehensive unifying ethos.

Students still come to universities with a “messianic” urge, craving an initiation of this sort, but what they’re offered instead is an ideology, which he described as “a parasite on an underlying religious structure.”

“You get indoctrinated into an ideology and you find where Satan is, you know, it’s not in you, it’s out there in the patriarchal oppressor, let’s say. And the thing about that is that it rings true mythologically and it is also true because every culture is oppressive to some degree and we’re all crushed as individuals by the dictates of arbitrary society. And kids get into the university and they’re taught this one-sided, lopsided doctrine with a utopian end and it matches their developmental needs perfectly,” he said.

If an ideology is accepted as an intimate part of one’s identity, it becomes difficult to let go of as it provides the person’s life meaning, Fiamengo noted.

“They would actually rather die than admit that they’re wrong,” she said.

Part of the solution, the panelists agreed, would be to restore universities to their original purpose of pursuing objective truth.